A Chinatown Ghost Story is the 23rd episode of Season 2 and the 49th episode of the series. It aired on September 12th, 2014, although it was released a week early on the Nick.com website.

Donnie becomes increasingly jealous of April and Casey's relationship; April is kidnapped by an evil spirit that intends to drain her powers.

In an alley way, the Purple Dragon gang has formulated a plan to break into the museum across the street from them. Meanwhile, above them on the rooftops, Donatello and Casey Jones are showing off their athletic capability to one another while searching for the mutant Karai and attempting to impress April. April doesn't seem to be thrilled about her friends' attempts to win her love and, when Casey decides to appease April by giving her a 'peace hug', Donnie purposely directs his attention to the Purple Dragons as they are breaking into the museum down below. In the museum, the Purple Dragons approach a sheathed blade and set their sights on stealing it for Steranko. Just then, Donnie, April, and Casey enter the museum and engage the gang members in battle. Even though the Purple Dragons are quickly outmatched, Donnie and Casey start to argue about one another's sly attempts to impress April, which allows the street gang to escape back to the alley. There, Fong (the Purple Dragon leader) reveals to his comrades that he was able to steal the dagger that they set their sights on. Fong then removes the blade's sheath with all of his strength and from the blade rises a mysterious figure that introduces himself as 'Ho Chan', ordering the Purple Dragons to bow down before him.

The Purple Dragons start to wonder if the figure that's speaking to them is a ghost, and the 'man' quickly explains that he was (and is) a supreme master of one of the first Martial Arts to ever exist and an art that, when performed correctly, appears similar to magic...Ho Chan explains that his spirit was trapped inside the dagger that they stole. He promises to give the Purple Dragons remarkable powers if they agree to become his minions and help him rule the world. The Purple Dragons quickly accept the offer and are given inscrutable powers (Fong gets lightning, Sid gets thunder, and Tsoi gets wind), which they demonstrate. Then, Ho Chan demands them to find him a 'lair of opulent beauty', which results in the Purple Dragons leading him back to their own lair/headquarters (an abandoned Fortune Cookie Factory). Ho Chan immediately dislikes the condition of the inside of the building, but admits that it will have to do...

Meanwhile, in the Sewer Lair, Donnie tells his brothers that their search for Karai has been going on for at least a week and that it's possible that they'll never find her. Leo and Raph point out that Master Splinter would disagree, and that he hasn't been the same ever since his daughter's mutation. Raph tells his brothers that, to get better results in their search for Karai, they will need Casey and April (who are at the ice rink) to help them out.

Back at the Purple Dragon's headquarters, Ho Chan continues to get disturbed by his messy surroundings. Meanwhile, the Purple Dragons start to use their powers against eachother, but Ho Chan demands them to stop and says that he has a very important task for them to perform. He orders them to go out and capture a girl that has a power within her that can return him to physical form. This girl turns out to be April...O'Neil!

Meanwhile, Casey is hanging out with April and Irma at the ice rink. April is having quite alot of trouble keeping her balance on the ice, but Casey tells her that not every one can be as 'cool' on the ice as himself, as, when he was really young, he was taught how to ice-skate by his father. Before long, the Purple Dragons force their way into the rink through the ceiling, and Casey wonders why they have come here if they just got their butts kicked. Casey bravely squares off with the powerful gang, but is quickly defeated by the gangs' powers. Once Casey has been struck down, the Purple Dragons grab both April and Irma and, with that, they become airborne and fly out of the hole they made in the ceiling, with April and Irma in their arms.

The Purple Dragons bring April and Irma back to their headquarters, where Ho Chan looks April over and tells her that she has power in her that has barely been tapped, which Ho Chan intends to have for himself. He then walks over to Irma and takes off her glasses, informing her that she has power in her as well, although Ho Chan doesn't understand it...yet. Then, April takes out her Tessen and breaks away from the Purple Dragon that's holding her. She then encourages Irma to break free as well, but, when Irma pointlessly kicks at Ho Chan, her foot passes right through his semitransparent body and she asks him if he's some kind of ghost. Ho Chan replies 'Indeed' and tells Irma that he's been cursed without flesh for 2,000 years, before restraining both Irma and April with glowing ropes and informing them that a ritual is about to start...

Meanwhile, the Turtles have arrived at the ice rink and Casey has already told them about what happened. Donnie immediately chastises Casey for allowing April to get taken away, but Casey replies that the Purple Dragons have powers. Donnie adamantly refuses to think that the Purple Dragons are powerful, firmly believing that they are only a gang of third class wannabes. Raph starts to think that Casey might be right, but, even so, they'll need to search for April and Irma and rescue them both. Casey humorously asks if they can save April and leave Irma with the Purple Dragons, but every one ignores him and rushes out.

Back in the Sewer Lair, Casey and Donnie decide to research Ho Chan on Donnie's laptop. They find out that Ho Chan is actually an ancient sorcerer that dates back to the Shang Dynasty. They then read that the only plausible way to defeat Ho Chan would be to use the mystic dagger against him, which is what the Purple Dragons stole from the museum. Casey then asks Donnie what they should do about his mind-controlled brothers. Donnie replies that nothing can get them out of their super-hypnotic state, but Casey disagrees, as an advertisement for free Pizza pops up.

Donnie and Casey drive the Shell-Raiser back to the Purple Dragons' hideout, but Leo, Raph, and Mikey quickly spot them and descend from the clouds. The three brothers work together to create an enormous gale of wind that quickly sucks Casey and Donnie up into it. While Casey is quickly defeated by Leo and blown down to the street, Donnie remains in the gale of wind and bravely tries to battle his three brothers, but he is defeated by them as well. Casey then reveals what his and Donnie's plan was - to distract Leo, Raph, and Mikey with Pizzas! Casey fires several pizzas out of the Manhole Cover Cannon in the Shell-Raiser and this entices the Turtles long enough for Casey and Donnie to go behind their backs and break into the Purple Dragons' headquarters. Meanwhile, inside, Ho Chan has nearly finished the process of draining the 'essence' from April that can make him become human. Casey asks Donnie if they should just whack Ho Chan while his eyes are closed, but it turns out that this plan won't work, as Ho Chan is listening to his every word. Ho Chan mentally tries to call the other turtles to his aid, but the three are still preoccupied with eating the Pizzas out in the street. Casey then leaps at Ho Chan and tries to attack him with his hockey stick, but misses. Ho Chan mystically extracts some of the 'essence' from April and starts to become human as he outwits Casey and Donnie in battle. Donnie manages to recover the mystic dagger from the floor and, just when he and Casey are about to be crushed by Chan's gigantic hands, Donnie throws it at Ho Chan's face and Ho Chan catches it. Then, April jumps down, grabs the mystic dagger from his hands, and thrusts it into his torso, after which he returns to the inside of the dagger and Donnie covers the dagger with its sheath. Leo, Raph, and Mikey then enter and are no longer under the influence of Ho Chan, as he has been defeated. An exhausted Irma then comes down to rejoin Casey and April and the Turtles hide, after which April convinces Irma that she has a bad bump on her head and that everything she saw was just a nightmare...

Later, Donnie and his brothers drive down to the docks and Donnie throws the mystic dagger (with Ho Chan inside of it) into the ocean water and it sinks into the depths, while Ho Chan vows to return, ending the episode in a comic style...

Splinter appears briefly, but does not speak. 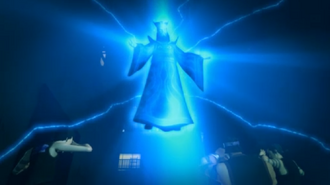 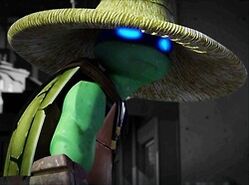 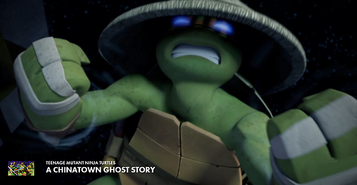 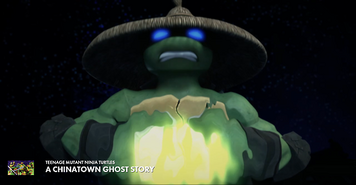 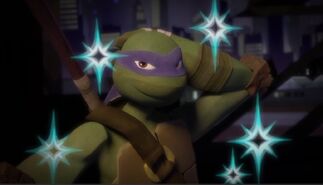 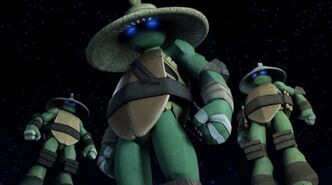 Leo the shocker, Mikey the air bender, and Raph the thunderer 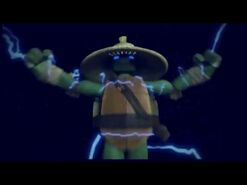 Leonardo with the power of Lightning! 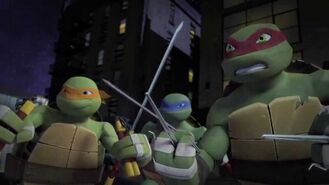 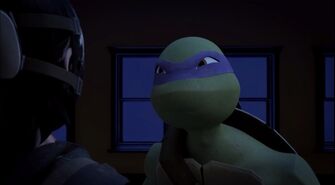 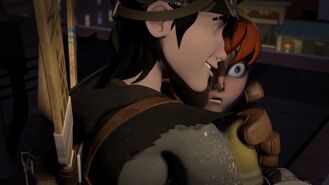 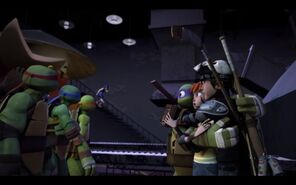 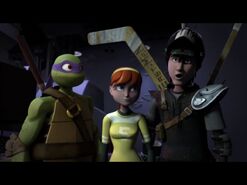 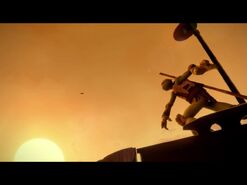 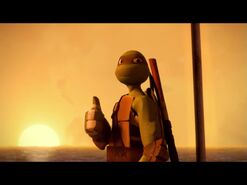 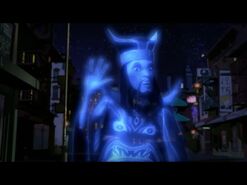 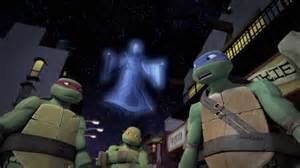 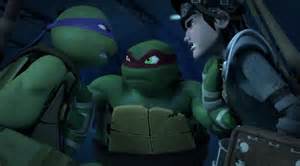 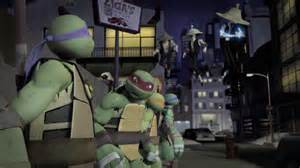 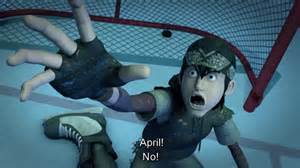 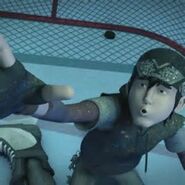 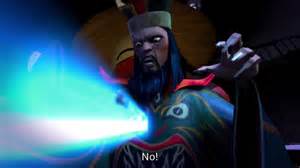 It's a short life 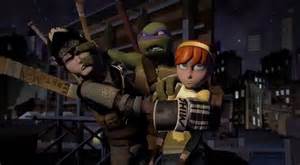 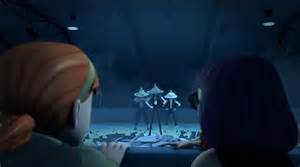 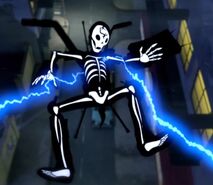 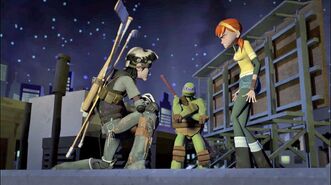 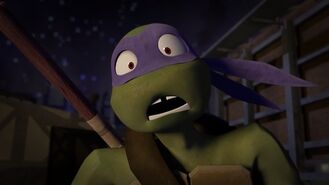 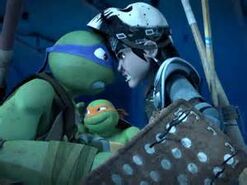 Retrieved from "https://tmnt2012series.fandom.com/wiki/A_Chinatown_Ghost_Story?oldid=73825"
Community content is available under CC-BY-SA unless otherwise noted.