A Foot Too Big is the second episode of Season 3 and the 54th episode overall.

Donatello discovers and befriends a creature that is being chased by a headhunter, so he convinces the others to help protect it.

Stalking through the woods late at night, a hunter referring to himself as "The Finger" is desperately looking for a creature he has been after for years. As The Finger ridiculously chats with a shrunken head that he claims to be his "Mama", on his necklace, he assures 'her' that he's gotten a feeling that he's about to subdue his target. Pulling out a crossbow with an explosive arrow for protection, The Finger is fully ready to defend himself when a large figure suddenly jumps down from a tree branch and roars at him from behind. The screen then switches to a shot of the forest from above, where we can see the smoke from a little explosion rising above the trees.

Meanwhile, busy at work in the barn the next morning, Donatello is preparing a little gift to present to April; a hand-made music box, with a picture of himself serving as the mirror for the top. To please Donnie, Mikey shows up and claims that the music-box looks 'perfect', but, when Donnie shows it to April in the farmhouse, she is at a loss for words and quickly dodges the romantic move to escape outside, claiming that she has to get some ninja training in. Mikey tries to comfort the distraught Donnie, while Raphael, who was secretly watching the whole scene, tries to persuade his brother to believe that the love thing between him and April just isn't going to happen. She's just a human (mutant) girl, while Donnie, on the other hand, is a giant mutant turtle that talks.

Ready to get his brother's mind off of the lovey-dovey stuff, Raphael gets both Donnie and Mikey to engage in a little forest ninja training, which the two younger turtles miserably fail at, as they keep on bumping into trees because of their lack of acclimation to the woods. Leo is watching the whole training session from up on a small hill, and seems pleased with Raph's handiwork. When he suggests an exercise called "Turtle Hunt" and Raph asks him if he'll partake, Leo is eager to go, until his injuries make him decline and he tells Raph to lead the exercise himself. Raph explains the Turtle Hunt exercise to Mikey and Donnie: the latter two have to stay hidden in the forest from Raph for at least an hour or they will be forced to clean out the chicken coop. Not wanting to clean out the coop, Mikey and Donnie take off in a hurry. While climbing up a tree to hide from Raph, Mikey spots a giant, hairy ape-like monster above them, angrily staring down at them. It roars and the two jump down from the tree on to the ground and draw their weapons. The monster quickly uproots a little tree from the ground and uses it to mimic the style Donnie is using to spin his staff. Just as Donnie claims the monster before them to be Bigfoot, it sends them flying with the tree it uprooted. The two brothers get up and run away with Bigfoot on their heels. They run into Raph, who doesn't believe what they're screaming ("BIGFOOT!"), until Donnie turns him in the direction of their pursuer. Raph and his two brothers prepare for some "real training", but Bigfoot effortlessly gets the better of them via sheer strength, size, and the mimicry of their respective weaponized fighting styles (Raph notes that "Bigfoot's got some skills."). Donnie manages to catch a glimpse of Bigfoot's right arm and sees that it is scarred and wounded. He tells the others that Bigfoot is hurt and likely doesn't want to fight and is scared. Raph is surprised when Bigfoot reveals that it can talk, albeit in broken English. Donnie offers to take Bigfoot back to the farmhouse so he can patch up its arm, which the monster accepts. Unbeknownst to them, The Finger has been spying on them the whole time and tells his "Mama" that Bigfoot has found himself a couple of "alien buddies", though The Finger refuses to let "little green aliens" interfere with the capture of the Bigfoot.

Back at the farmhouse, Donnie introduces Bigfoot to the rest of the group, although Leo and Casey are less than thrilled to meet it. April bandages the creature's arm and it tells her and Donnie that it is being hunted by a "very bad man" called "The Finger". It turns in Donnie's direction and smiles, hugging him tightly and stating that Donnie is a good man, that it loves Donnie, and that it is a lady. Casey and the others--sans April--all begin laughing about the predicament Donnie is in. Throughout the day, Bigfoot relentlessly follows Donnie around wherever he goes, trying to get the brainiac turtle's attention, which only succeeds in making Donnie feel uncomfortable. Raph has Bigfoot take Donnie and Mikey into the woods to help them work on their camoflauging abilities, while Raph cleans out the tub in one of the farmhouse's bathrooms (Bigfoot went #2 in it). In the middle of the camoflauging session, The Finger shortly appears and fires a round of arrows at Bigfoot, but Bigfoot grabs Mikey and Donnie and makes her escape with them.

That evening, in the farmhouse's kitchen, Bigfoot has successfully made an awful-smelling (and awful-looking) soup for Donnie and asks April to give her a makeover. After April is finished with this, Bigfoot approaches Donnie with the soup in her hands and the makeup on, once again trying to make a pass at Donnie, but he hastily makes an excuse and runs away, leaving Bigfoot upset. Donnie complains to Raph about Bigfoot and that she has been following him around everywhere "like a lovestruck puppy". Raph, while playing a video game and without turning around, simply comments "Now you know how April feels." Donnie is about to object to the remark, but is quick to realize that Raph is right and hangs his head, filled with guilt and remorse.

Outside, Casey and Leo are in the barn talking and laughing about how Bigfoot has been pestering Donnie, with Casey wondering if she's Donnie's type. Leo thinks that it's possible "after a shave" and the two begin to laugh again. They hear whimpering and turn around, seeing that Bigfoot was just listening in on their conversation. Upset and hurt, Bigfoot runs off into the forest sobbing. Mikey yells at Casey and Leo (who didn't mean any harm) for being so insensitive, and he and Donnie rush off to pursue Bigfoot and make amends with her. Unfortunately for them, Bigfoot quickly falls into a hole in the ground and gets ensnared by a net placed there by The Finger, who appears and is intent on making money off of Bigfoot's capture. When Donnie and Mikey arrive where Bigfoot has been captured, they are ultimately knocked out by a log booby trap. The scene soon shifts to Mikey waking up as he dangles from a single strand of rope attached to a tree branch. Donnie is in the same situation next to Mikey. Donnie informs Mikey that The Finger has been debating how to finish them off. When The Finger decides that he should stuff them right then and there, Donnie escapes from his restraints by insulting The Finger's "Mama", angering him and causing him to fire an arrow at Donnie, who swerves to the side, causing the weapon to cut through the rope instead. Donnie then cuts Mikey loose and the two engage The Finger in combat. Unfortunately, The Finger becomes enraged after a brief spell of getting pummeled, causing Mikey and Donnie's attacks to have no effect. He effortlessly pounds them into the dirt, until Donnie throws an explosive arrow into the quiver strapped to The Finger's back, causing the remaining forty-two arrows in it to explode on him. When the smoke clears, a soot-covered The Finger states that, if he's going down, he's taking Bigfoot with him. At that moment, Bigfoot, still with the make-up on, sticks her head out of the net she's in, causing The Finger to realize that Bigfoot is a female. He apologizes to his "Mama" and says that he didn't know, claiming that he can never "shoot no lady", before sobbing profusely. Bigfoot picks The Finger up in an attempt to comfort him and, after seeing his soot-covered face, falls in love with The Finger (to the shock of Mikey and Donnie) and Bigfoot carries the "sad man" off into the woods to take care of him.

The next morning, in the front yard of the farmhouse, April is chopping up wood with an ax and Donnie approaches her, telling her that he intends to give up on trying to win her over because he's realized that what Bigfoot did to him was the same thing that he was doing to April. April is surprised by what Donnie is saying and looks at him sympathetically. Donnie hangs his head, heartbroken and sad, stating that he's "just a mutant." After a moment of silence, April coyly smiles and says that Donnie isn't just a mutant. She leans toward him, saying that he's her mutant, before gently grabbing him and pulling him toward her, planting a brief but affectionate kiss on his lips, much to Donnie's shock. She then turns and walks away smiling, leaving a puzzled Donnie to mention that he "understands nothing..."

Master Splinter does not appear in this episode.

"It's got spiders so big they play a banjo!" 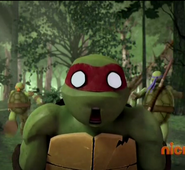 Retrieved from "https://tmnt2012series.fandom.com/wiki/A_Foot_Too_Big?oldid=73839"
Community content is available under CC-BY-SA unless otherwise noted.