Bishop is a member of the Utroms who sent the Fugitoid to the Turtles. He is an excellent hand-to-hand fighter and can even take on the Triceratons.

Annihilation Earth: While the Turtles, April O'Neil, and Casey Jones were strolling around the city in the Shell Raiser, all of the sudden a black sedan pasts by them. It was Bishop inside. The Turtles identified it as a Kraang, and followed the speeding car. The Turtles soon lose Bishop, but, in an alley way, they spot Bishop's garfitti on the wall. It reads: "TURTLES. 3117 BAYFRONT STREET. MIDNIGHT.". Michelangelo also pointed to a drawing of a Bishop piece from the game Chess under the note. The Turtles arrive to the address, which turns out to be the meat-packing building where they fought Tiger Claw in The Wrath of Tiger Claw. The gang hurry into the building. They see Bishop and attempt to fight the Norman. The Turtles are defeated by the alien.

Bishop is a Kraang Norman with shades. His Kraang form looks exactly like a normal Kraang. 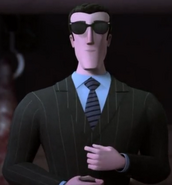 Bishop fighting Kraang along side The Utroms

Bishop takes of his shades when explaining to the turtles that he isn't evil.
Add a photo to this gallery
Retrieved from "https://tmnt2012series.fandom.com/wiki/Bishop?oldid=73636"
Community content is available under CC-BY-SA unless otherwise noted.