The Bo-Staff is a traditional ninja weapon for use in battle. It is six feet long, and is usually made of white wax wood, but some are made of such materials as oak or bamboo. Donatello (Or Donnie) uses the Bo-Staff as his main weapon in TMNT. It has a hidden switch along its length that triggers the release of a single edged blade from one end of the staff turning it into a Naginata, which is a traditional Japanese spear. The weapon has grip tape wrapped around the middle. Donatello has attempted to improve upon the design. His laser-guided missile launching staff was less than successful. The Bo is a versatile weapon, able to defend as well as attack. Its length allows the user to keep enemies at a distance and twirling the staff quickly can block attacks. Unfortunately, it easily breaks when used against Kraang robots.

This matches Donnie well, as he is more along the lines of defense and strategies more than offense. There's a running gag where his bo-staff is easily destroyed by an enemy.

The Pulverizer (Timothy) once used the Bo-Staff to practice ninja moves, which he stunk at, until Donnie showed him some basics (he nearly killed himself when he triggered the blade)

Mikey used the Bo-Staff when he was forced to poke Master Splinter with it while he was resting in "I, Monster" and managed to push the hidden button, sending the blade within inches of Splinters face.

In the episode "Pulverizer Returns" Leonardo was forced to used the Bo-staff by Splinter to teach the turtles how to fight outside their elements. Leo would often trip over it though (he tried to use it in the style of him wielding his ninjato).

In the TMNT Adventure comic, Raphael used the Bo-Staff so he could learn how to fight outside his element.

Donnie's tricked-out bo staff smacks, spears and jabs like no other. Donnie swings his bo, hitting a foe. 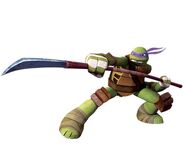