TMNT Wiki
Register
Don't have an account?
Sign In
Advertisement
in: Season 4, Episodes, Episodes that aired in 2016, The Show

Broken Foot is the 16th episode of Season 4 and the 94th episode overall.

One foot goes right, the other goes left.

When Leonardo secretly allies with Karai, he finds himself in deeper danger than he ever could have imagined.

Karai and Shinigami prepare to attack a temple that Karai knows is a front for Shredder where he keeps all his laundered money at. While they are there, they are ambushed by Hun and the Purple Dragons. Before Hun can use his spiked brass knuckles on Karai, Leo arrives, decked out in black, and overpowers Hun and the Purple Dragons with Karai and Shinigami. As for the laundered money, Leo, Karai, and Shinigami walk away from the temple after setting fire to the cash, leaving it to burn down.

Back at the lair, a Channel 6 news broadcast reports on the temple burning, along with the NYPD arresting Hun and the Purple Dragons, who were left hanging from a streetlight with their faces painted, compliments of Shinigami.

Leo is soon summoned to see Karai and Shinigami again, as they prepare to attack Auman Chemicals, having brought in some Foot Ninja from Japan to assist. Arriving at the chemical factory, they find it heavily guarded by Foot-bots, Tiger Claw, Rocksteady, and Bebop. Despite the heavy resistance, they are able to plant the explosives and retreat.

Meanwhile, Mikey discovers Leo gone, and takes the Party Wagon with Raph and Donnie to Auman Chemicals, arriving just in time to discover the explosives about to blow, and Donnie saves Raph and Mikey, at the cost of being seriously injured himself. When Leo sees Donnie has been seriously wounded, he separates from Karai and Shinigami to help get Donnie back to the lair for Splinter to heal with the healing mantras. However, they are pursued by Bebop, Rocksteady, and Tiger Claw, who manage to wreck the Party Wagon, but the Turtles are able to escape before being caught. While there, Leo comtemplates his decision with aiding Karai and Shinigami, apologizing to Splinter for what happened since it resulted in Donnie getting hurt. April offers her advice to him to help cheer him up from his guilt, but Leo soon receives another text from Karai with another mission.

Taking Raph and Mikey with him, Leo learns that Karai is planning to locate and destroy the factory producing the Foot-bots, thereby crippling Shredder's army since without the factory, his numbers will be diminished greatly. However, Leo is hesitant to assist, and when he and his brothers refuse to help, Karai takes it in stride, blinding them with a dust bomb while Shinigami uses one of her bat tricks to further confuse them while the girls and the Foot Ninja depart on their mission.

At the factory, Tiger Claw, Rocksteady, and Bebop are already there and on high alert, knowing that if they lose the factory, their forces will be crippled beyond repair. To ensure the factory's survival, they've begun producing Chrome Domes, elite Foot-bots to deal with Karai, Shinigami, and their Foot Ninja. Despite taking down several of them, Karai, Shinigami, and their Foot Ninja are overwhelmed and captured. Leo arrives with Raph and Mikey, but Raph's attempts to shut down the factory only serve to produce more Chrome Domes to where they are sorely outnumbered. That is until Karai plants a charge on the large cistern at the top of the factory and detonates it herself, despite being close enough to be burned by the explosion, allowing the cistern to fall into the molten steel below, splashing it about and destroying the Chrome Domes along with the factory. Leo rushes to Karai's aid, and despite her injuries, everyone escapes as the factory burns down around them.

As the NYPD rushes to the scene of the inferno, the Turtles regroup in an alleyway with Karai and Shini, where Karai is able to use her mutant abilities to heal her burn injuries, to the amazement of the Turtles.

Back in the lair, Donnie has been fully healed by Splinter, and as the other Turtles celebrate, Karai arrives to apologize to Splinter for having allowed her revenge to result in Donnie being hurt. Though Splinter reminds her how dangerous seeking revenge is, Karai admits that she does need help with dealing with Shredder, but as of now, Shredder's criminal empire is the least of her concerns. As of now, she's going after the Shredder himself.

"A good leader must foresee how bad decisions lead to bad results." 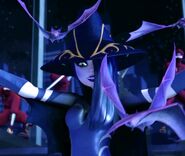