Casey Jones is a TMNT character that first appeared in the second season of Teenage Mutant Ninja Turtles. He is a young vigilante that constantly wears a hockey mask and wields several hockey sticks. He is also a high school student in April's grade, who got held back.

"The name's Casey Jones: high school student by day, crime fighter by night. I've seen stuff you wouldn't believe! I'm good at two things: hockey and keeping my city safe from criminal or dangerous mutant scums. I'll do anything to protect my friends, and that includes April and the Turtles."

Born in 1995 in New York City to a former NHL player, Casey has kept failing miserably in high school, and was assigned to be tutored by April O'Neil so that he can continue playing on his hockey team. At first, April is skeptical about him, particularly due to his clumsy nature. However, when the two worked together to stop Mutagen Man and a squadron of Robot Foot Soldiers, she began to open up to Casey and enjoy being in his presence. Casey constantly flirts with April (or "Red", as he calls her). Later, when he finds out about her connection to the Turtles, he and Raph hit it off - First as enemies, then finally friends. Ever since, Casey has become a definite ally of the Turtles, he does feel uncomfortable when he's around Splinter.

Casey Jones is a teenaged boy with a slender build, long black hair and brown sometimes dispicted as blue eyes. He wears a black shirt, jeans, a black bandanna, along with fingerless gloves. He is missing three of his upper front teeth from playing hockey.

When in his crime fighting suit, he wears a hockey mask and underneath it, is his painted face that resembles a skull. He has body padding everywhere and carries with him hockey sticks, baseball sticks, lacrosse sticks and other sport gear. Hidden in his glove, he also has a built-in tazer to shock his opponents. His shoes are also specially designed to change between sneakers and roller skates, making sure he is ready for any battleground.

Casey Jones appears to be quite arrogant, occasionally pushy, a bit flirty (at least around April), quite inattentive to his school work, and thinks highly of himself (even talking about himself in third person), Even with his first encounter with April, he managed to show how involved he is with himself and the fact that he thinks little of others. But he admits that he does need a tutor, as he wishes to stay on his hockey team. And while he tended to aggravate April a bit during their tutor session, he tried in his own way to be friendly and get her to enjoy herself with something besides just books. He also shows a sense of "empathy" when she shows to be exhausted from that day, and reaches out to wipe a smudge off of her face.

During their encounter with Mutagen Man and the Robot Foot Soldiers, Casey became protective over April and tried his best to watch out for her. He was also very impressed by how April fights - and he then asks if encounters like with Mutagen Man and Robot Foot Soldiers happen frequently. When she answers "too often", the idea seems to excite him.

Brave and confident, Casey Jones proves he is ready for a fight. Becoming friends with April and the Turtles, he shows that he is untrained, but his skills are ready to rumble with the best. As Casey spends more time with the Turtles, a brotherhood forms and they become a solid team, taking on any enemies that come their way.

Fighting Skills: Casey Jones will use his hockey sticks as weapons against his enemies. He can hold his own against people like Raph, and was told by Raph that he fights well but recklessly. He counts on his weapons, more often than his own hands and feet.

Strength: Don't let Casey Jones's skinny body fool you, Casey's all muscle. He was shown to knock out one of the Rat King's Giant Rats with his bare fist!

Endurance and Stamina: His stamina is pretty high for a human as he can run and fight for an agreeable period of time.

Intelligence and Inventor: Casey seems to know all the strengths to master his enemies' moves. He can also create spectacular gizmos that are almost as good as Donatello's.

Speed: He can run faster than an average athlete, but he can move much faster wearing rolling skates.

Hockey Player: He is shown to be a skilled hockey player, capable of ice skating very well, and can hit pucks with great accuracy.

Driving Skills: His driving skills are so good that he can even drive the new upgraded car with little to no issues.

One of Casey's first artwork. 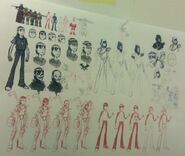 Casey's concept along with his size comparison along-side the Turtles. 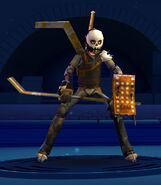