TMNT Wiki
Register
Don't have an account?
Sign In
Advertisement
in: The Show, Episodes, Episodes that aired in 2015, Season 3

Casey Jones VS. The Underworld

"Casey Jones VS. The Underworld" is The 14th episode of Season 3 and 66th overall.

Casey Jones thinks he can take on the criminal underworld alone but soon discovers that he is in over his head when he comes face to face with the new leader of the Purple Dragons and Shredder.

In a voiceover, Casey Jones remarks that New York City is on its way to returning to normal after the Kraang invasion. Despite this, Casey is frustrated that he was sidelined as the Turtles stormed Dimension X to fight the Kraang and undo the mutation of New York's citizens. He notes that while most of the citizens have teamed up to restore the city, certain people continue to terrorize it, specifically the Purple Dragons.

We then see Casey come across the Purple Dragons robbing a bank and about to abscond with the cash. Casey drops in and faces the three, easily outmatching them. Casey is then confronted by their new leader, Hun. Casey is not at all threatened by Hun and tries to attack him but is defeated and hit in the groin with his own hockey puck, after which the Purple Dragons escape (without the money).

The Turtles and Splinter are moving back into their old sewer lair, which was trashed during the Kraang invasion. They start getting to work cleaning the place up; Leo slowly cleans the living room while Donnie finds his lab a mess and his previous experiments ruined. In the dojo, Splinter restores his family picture to its mantle, wondering where his daughter is now. Michelangelo cleans up the kitchen, noticing that the food in the fridge has spoiled. Seeing an old slice of Pizza, Mikey eats it despite it being covered in mold and insects and realizes that he will feel the consequences at some point (in a bad stomach ache). As Raphael clears out some Kraang droid parts, Casey walks into the lair looking quite mad. Raphael asks Casey where he has been, and Casey replies by yelling at Raphael for not fighting the crime that has lately begun to increase. Leonardo explains that they just got back to their home, and Donnie backs him up, saying, "We just stopped a little thing called a massive alien invasion." Michelangelo tells Casey that its good to have a little downtime while stuffing his face with cheesy snacks. Casey responds that evil never takes downtime and mentions that he took on the Purple Dragons, to which everyone sarcastically ''oohhs''. Raphael asks Casey how he fared, and Casey tries to hide the fact that he was beaten by saying that he stopped them from escaping with the cash that they stole. Donnie asks more plainly if he beat the Purple Dragons, to which Casey doesn't answer and to his embarrassment everyone laughs. Casey angrily walks out of the lair, proclaiming that he is fine with protecting the city alone. Donnie jokingly gives Casey good luck with this.

Once Casey leaves, he prepares to look for the Purple Dragons with the intention of taking down their new leader. However, before he can start this search, the Shredder, Tiger Claw, and Fishface riding Dragon Choppers catch his eye. Casey follows them to an Italian restaurant and enters the kitchen to see why they've come here. In the restaurant sits Don Vizioso, an obese Sicilian mob boss who has done business with the Shredder in the past. The Shredder seats himself opposite of Vizioso at a table, and the plump man remarks that the Kraang invasion could have proven fortuitous for business men like them. The Shredder denies the ''them'' part, noting that Don is just a gangster and is unaware that the power in the city has shifted to the Foot Clan. Vizioso asks what the Shredder is trying to say, which initiates a standoff that lasts seconds. The Shredder orders his men to stand down before mentioning that he controls Asian gangs through Hun, South American gangs through Xever, and Russian mobs through Steranko. Suggesting that Don surrender his legions to him, the Shredder slices the meatball on his fork in half and threatens to take his life. Don gives in to the Shredder, asking him how he can be of service. Meanwhile, Casey, pretending to be a bus boy, fills glasses on the table with wine. As Vizioso rambles about a shipment of chemicals that arrived at the docks, the Shredder pins Casey, accusing him of being a spy and asking who sent him. Casey resorts to saying that he is just a bus boy, which the Shredder believes but tells him not to show his face in here ever again.

Bursting with adrenaline over this close call, Casey texts Raphael about what is going on. The scene then switches back to the Turtles' lair where they continue to clean, with Raphael throwing Kraang droid heads in a pile and Leo can be seen scrubbing the floor. The two stop to catch their breath, Raph exclaiming that he needs a break and Leo commenting that cleaning is way harder than training. Michelangelo panics over the TV remote that has gone missing, causing Donnie to hit him in the face with a broom. Just when Mikey starts to accept that the remote is gone forever, he notices it in front of him and turns on the TV to watch Crognard the Barbarian. Raph receives Casey's text about his close encounter with the Shredder and his plans to go to the docks. Fearing that Casey could be putting himself in jeopardy, Raph goes to find him alone.

At the docks, Rahzar is seen throwing a man out of a van, and Fishface searches the back of it for chemicals. Casey, previously hidden, shows himself and attacks Fishface from behind. Rahzar and Casey have a brief fight with Casey gaining the upper hand, but a reinvigorated Fishface manages to kick Casey into a pile of boxes and Casey struggles to get free. Casey eventually frees himself and prepares for round two of the fight when a box lands on Rahzar and a caught off-gaurd Fishface is kicked down and defeated by Raphael. Casey gets Raphael to help him lift a case that he found, and the two bring it into an alley. Raph wants to know why Casey went after Rahzar and Fishface on his own and why the attack was worth risking his life. Casey yells back at Raph, hinting to open the case. They discover the dangerous chemical within it and Raph plans to return it to Donnie. Casey opts out of helping Raph with this, now wanting to go after the Shredder. Raph insists that the Shredder is a dangerous assassin and that Casey wouldn't stand a chance against him. Despite this, Casey willfully disagrees and leaves, Raph having no choice but to let him go. In Stockman-Fly's lab, the Shredder checks on the mutant snake Karai as she is held in a sort of small habitat. After she bangs on the glass separating her from the Shredder, the latter demands that Stockman arrive at a retro-mutagen solution soon. Tiger Claw then arrives, informing the Shredder about the Purple Dragons' arrival.

In the Shredder's throne room, Hun bows and shows the Shredder that he has found more of the chemical components that he's seeking. Stockman-Fly explains that he does not have the equipment necessary to work with the chemicals; the Shredder angrily demands that he find the equipment. Hun then offers to show the Shredder the factory on the Purple Dragons' turf where he found the chemical. The Shredder agrees to this and Casey, having listened to the whole conversation, plans to follow them. In the sewer lair, Leo and Raph argue about letting Casey again go off on his own while Donnie analyzes the chemical. Donnie doesn't have the remotest inkling as to what the chemical is but thinks that it isn't the work of Stockman because the latter doesn't possess all the equipment needed to synthesize it. Mikey continues to eat his cheesy snacks from earlier, causing Leo to ask him if he knows what's in the food. Mikey insists that it's all natural, but Donnie dissents from this, looking at the ingredients and commenting that the snack is slightly radioactive. Leo looks over the container and reads that Auman Chemicals manufactures the snacks. Donnie researches this factory and finds that it is the biggest chemical manufacturing plant in the city and that it's in Chinatown, thus on the Purple Dragons' turf. The Turtles decide to go check out the factory, and this is where the Shredder and Hun just happen to be.

At the factory, Hun shows the Shredder around, pointing out mixing vats, extrusion machines, and other useful equipment. The Shredder praises Hun for bringing the factory to his attention, maintaining that it will be adequate for his plans. Just then, a masked Casey arrives and shoots exploding hockey pucks in Shredder's direction. Shredder attacks Casey, removing his mask and realizing that he is the boy from the restaurant. Angered, Shredder kicks Casey across the floor and backs him into a corner, preparing to end his life. Suddenly, the Turtles arrive, with Leo and Raph kicking the Shredder to keep his distance from Casey. A fight quickly breaks out, and Rahzar activates some of the factory's machinery. Mikey fights Rahzar, Donnie fights Fishface, Raph battles Tiger Claw, and Leo faces the Shredder, claiming that he will not walk away from this. Casey also has a rematch with Hun. Donnie discovers some additives for Mikey's cheesy snacks wrapped in wheel-like containers and comes up with a plan to contaminate the substance in the factory's main mixing vat with them. Donnie dodges Fishface to drop the container but has it knocked out of his hand. The container is knocked all around: onto conveyor belts and into the hands of others. Donnie tells Casey to get it into the mixing vat, which he eventually does to the chagrin of Shredder. The substance does not react well to the additives and it sprays upward in a torrent; the Turtles and Casey leave the building just before the torrent douses its interior. The Shredder says that the Turtles have only delayed his plans and demands that the factory be cleaned up.

Back at the lair, Raph, Leo, and Mikey congratulate Casey on walking away from his fight with the Shredder mostly unharmed. Casey thanks them and says that he still remains an independent vigilante. Meanwhile, Donnie examines the chemical further and finally forms a belief as to what it is. He tells the others that it is not an explosive and likely the start to a mind control formula. He then goes on to state that the formula could possibly be used to control Karai, them, and everyone in New York City.

Splinter does not give wisdom out.

Casey Jones VS. The Underworld/Transcript 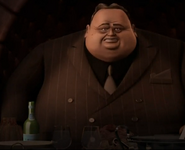 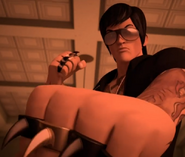