TMNT Wiki
Register
Don't have an account?
Sign In
Advertisement
in: Episodes, Episodes that aired in 2015, Season 3,
and 2 more

Clash of the Mutanimals

"Clash of the Mutanimals" is the 16th episode of season 3 and 68th overall.

"REMEMBER who the real enemy is."

Danger awaits the Mighty Mutanimals as Shredder and his henchmen manage to kidnap them, for experimental reasons.

Two mercenaries known as the Fulci twins (Don Vizioso's bodygaurds) get out of a car on the docks to meet with Tiger Claw, who is trading a case of money for the final ingredient for Shredder's mind control formula. Slash then arrives with the other Mighty Mutanimals. The twins fire at them, causing a fight that ends with Tiger Claw taking Slash and Rockwell with him as captives, leaving Pigeon Pete and Leatherhead behind.

At the Turtles' lair, Mikey points out the fact that the cartoon shows they watch reflect their missions, which Leo quickly dismisses as reading too much into a cartoon show. Raphael hears all of his while punching his training dummy and says that their next mission should be taking out the Shredder for good. Both Leo and Mikey tease Raphael, calling him impulsive and overemotional and leading the hot tempered turtle to retort that he's neither of those things. Raph disturbs Donatello, who is in his lab working on the Shell Raiser. Just as the genius finishes repairing the vehicle, a loud crash is heard, drawing him outside. Thinking that Raph has finally blown a gasket, Don is about to focus on the hothead when Leatherhead suddenly appears. The giant alligator explains what happened back at the docks to the Turtles before Pigeon Pete appears. Pete starts looking around the lair in awe, saying that the only thing its missing is bread. Mikey says that they have something better than bread: pizza crust. Pete tries it, and he instantly loves it. Raph complains about Tiger Claw not taking Pigeon Pete instead, given the bird's annoying nature. Leo reminds Raph that he is still not such a huge fan of Slash either, but the Mutanimals are his friends and they need to be rescued.

Meanwhile, in Baxter Stockman's lab, the Shredder is once again staring into Karai's enclosure when Tiger Claw comes in with the final additive for the mind control serum. Baxter Stockman makes haste to add the ingredient to a concoction of others to finally create the formula. However, before testing out the formula on Karai, Shredder has the mutant fly test it out on Rockwell and Slash. Stockman agrees, in case there are unexpected side effects. Both Slash and Rockwell are not at all willing to be used as the subjects of this experiment for Shredder's mind control serum and resist. Stockman shows the two just how he plans to administer the serum: via repulsive, mutant worms. He pours the formula into a jar containing the worms and picks a worm up with pliers, focusing it toward Slash, who cries out in pain.

Outside Shredder's hideout, the Turtles, Leatherhead, and Pete are arguing about the best way to save Rockwell and Slash when suddenly the two mutants come racing out of the building, seemingly successful in escaping on their own. An army of Foot-Bots chases after them, but the Turtles and the rest of the Mutanimal team quickly take these robots out to aid Rockwell and Slash. Noticing that the two aren't looking so well, Donnie suggests that they take them back to the lair pronto. Once Slash and Rockwell are soon there, they are given soup by Master Splinter.

Raph is glad that both Slash and Rockwell are alright, but Mikey senses that something is off about them. Rockwell confirms his suspicions by remembering that he and Slash were experimented on by Shredder. Slash begins to explain about the worms but doesn't get to finish, as he is crippled by a headache. Splinter then goes to fetch him some water, but Slash suddenly turns around and hits him with his Mace, knocking him to the floor. Both Leo and Raph blocks Slash's next attack and push him away from Splinter. As Raph fights Slash, Leo and Donnie go to check up on Splinter, but the two of them get lifted from the ground by Rockwell's psychic powers.

Slash throws a smoke bomb in Raph's face, rendering him senseless and allowing Slash and Rockwell to take him away. Slash and Rockwell exit the lair and make their escape in the Party Wagon. Mikey wants to tend to Splinter's injuries, but Splinter reassures him that he'll be fine and that saving Raph is the top priority now. Luckily, the Shell Raiser is fully operational again thanks to Donnie, so the Turtles, Leatherhead, and Pete pursue the others in it. On the streets, Donnie fires stuff from the garbage cannon at the Party Wagon, but Slash and Rockwell dodge the objects. The Party Wagon then releases a trail of oil, causing the Shellraiser to crash. As Slash and Rockwell get away with Raph, Donnie mentions that they at least know where they're heading. Leo admits that they now have to do what Raph wanted to after all: take the fight to Shredder.

Raph awakens to find himself being strapped down in Stockman's lab, with Rockwell and Slash standing next to him. He tries to break free, just as Baxter takes out another one of the Mind-Worms. Stockman brings the worm close to Raph's head, which is being held firmly in place by Slash. The worm is placed right in between Raph's eyes and it proceeds to somehow enter his brain, making Raph scream in pain as Slash did.

As Leo commands the remaining Turtles and Mutanimals to barge into Shredder's lair without a plan, Raph tried to attack Shredder, only to stop due to the mind-control serum now streaming into him. Shredder commands Raph to attack him, and told him to stop once Raph is about to launch the killing blow to him. That's when the others show up and Leo told Raph o finish Shredder off. But to their horror, they discovered that Raph is now fully under Shredder's control along with Rockwell and Slash. Raph walks up to a giant skull on the wall, place his hands into the eye holes, and withdrew it back, now armed with another set of the Shredder's gauntlets.

Leo attacks Shredder, but was blocked by Raph. Leo tells him to snap out of it and that Shredder's the enemy. But Raph just takes a fighting stance and said, "You are the enemy" before charging towards Leo. Shredder watch the fighting as Slash, Rockwell, Baxter and Tiger Claw goes up against one of the remaining four mutants; Slash against Leatherhead, Baxter against Pete, Rockwell against Donnie, and Tiger Claw against Mikey. Leo keeps trying to get through to Raph, and finally notice that he couldn't feel emotions since Raph's now Shredder's puppet. The insults manage to get Raph mad, resulting in the Mind-Worms being spit out of him.

Shredder ask Stockman what is going on, with the Mutant Bug admitting he doesn't know. Donnie compliments Leo on discovering the way to get rid of the mind-control serum and starts insulting Rockwell. Once Rockwell's freed, he use his psychic powers to blast the worm out of Slash. It was then Shredder decided to end the experiment by going up against all of the Turtles and the Mutanimals single-handedly. One by one, each of the mutants are defeated by Shredder with only Leo and Raph left. As the two Turtles are bout to be defeated by Shredder, Slash and Leatherhead pushed down one of the statues on him. But the eight mutants only have a moment of peace before Foot-bots flooded into the room, with Tiger Claw getting back up to his feet. Raph wants to fight some more, but Leo told him that they'll do it another time. All four Turtles throw a smoke bomb, giving them and the Mutanimals a getaway. Tiger Claw commands the Foot-bots to move the statue, revealing the Shredder safely hidden underneath it. He got out of the hole and screams in anger at his defeat.

Back at the lair, Slash and Rockwell stand before Splinter, Slash offering him some tea and apologize for their actions. Splinter said there is nothing to forgive and that it's Shredder's doing, not theirs. Rockwell thank the others for saving them with Mikey saying it's good to have Raph back. Raph said it's all thanks to Leo, with the eldest Turtle saying that they needed Raph since every team needs a hothead like him in it. That got Raph growling as he stands before Leo, making him feel a bit nervous. But then to Leo's shock, Raph grabs him in a tight hug, with Leo smiling at him. 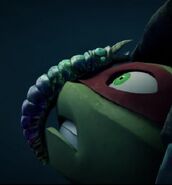 "You're the best bro" 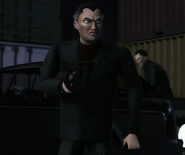 Leonardo and Raphael VS Shredder

"You are the enemy!" - Raphael