TMNT Wiki
Register
Don't have an account?
Sign In
Advertisement
in: Season 3, Episodes, Episodes that aired in 2015,
and 3 more

"Dinosaur Seen in Sewers!" is the 24th episode of season 3 and the 76th overall. It was aired on September 20, though Nickelodeon showed the episode on the nick website on September 14th.

When Raphael befriends Zog, an alien Triceraton, he may have bitten off more than he can chew.

The episode starts with Slash and Dr. Tyler Rockwell scouting the sewers on a lookout for the Dino-man in an article of a magazine they're holding. During their search, they heard heavy footsteps nearby. Slash though it might be Leatherhead, but Rockwell points out that he's with Pigeon Pete on the other section of the sewers they're in. They were both then attacked by a mysterious creature, badly injuring them as it escapes.

Meanwhile Leonardo, Donatello and Michelangelo are about to watch the finals of Crognard the Barbarian, but Leo wonders if it seems a bit unfair that Raph isn't there to watch it with them. Mikey points out that it's Raph's fault for not being back on time and plays the episode, which shows Crognard being defeated by a giant multi-headed dragon. Mikey then complains about how the ending goes, just as Raph, who's at the surface in his vision quest gear, calls Leo. But midway through the conversation, Rockwell manage to contact Raph with his psychic powers, making said Turtle head back into the sewers. Raph arrive at where Slash and Rockwell are beaten up, the two of them each giving their own thoughts on what happened to them, though Slash actually sounded like he's panicking. Raph takes his leave to find who's responsible for hurting Slash and Rockwell, despite the warning, while telling the two injured mutants to get treated at the lair.

Meanwhile, Leo and Donnie are starting to get worried about where Raph is, while Mikey is looking through the Crognard fan-base to find that there isn't a continuity after the final episode they watched. That's when Rockwell contact them with his psychic powers to inform them on what Raph's up to, just as he and Slash arrive at the lair.

Back with Raph, he found the dino man and starts to fight against it. Unfortunately, his attacks are useless against the tough skin of the dinosaur and was about to get literally squashed after hearing its after the Kraang. Raph notice that it keeps demanding for orders so he took that as a chance to try and get onto its side under the name 'Zoraph', which to his surprise actually works. After getting over the shock, Raph commands Zog to find the Kraang, commenting that this day is getting awesome.

At the lair, Mikey "fixed" the final episode of Crognard, just as Leo receive a call from Raph. He, Donnie and Mikey meet up with Raph in the sewers. Raph shows them Zog, who thought that they're the enemy. Raph immediately stops him, and the three brothers are shock that the dino man is real and that Raph manage to some what tame him. While Zog is finding the Kraang, Raph explains what he found out to his brothers, who couldn't believe him since they were sure the Kraang would never come back. Zog suddenly stops and stomps on the ground rapidly, revealing a hidden Kraang location underground. As the Turtles and Zog fight off the Kraang, Donnie discovers that a number of Kraang are at the Statue of Liberty.

They headed there to discover that they're about to open another portal to start yet another invasion by releasing a large number of Technodrome into the city. Leo, Donnie and Mikey handle the Kraang while Raph and Zog moves to the top to stop the portal to Dimension X from opening. With Zog's help, the portal closes and the Kraang are defeated. Zog founds his stuff that was stolen from him and he activates a breather collar that helps him to breathe on Earth. But when he did, his mind clears up and instantly knock Raph out. The other Turtles found Raph unconscious and all four of them tries to find Zog, who mention that he's going to signal the Triceraton army to destroy the Earth.

Despite all their effort, the beacon was activated for just a brief moment before Raph destroys it. As Raph and Zog fights at the torch of the statue of liberty, Zog falls and hangs at the edge. Raph offers a hand to help, but Zog lets go and fall. The other Turtles appear and comfort Raph, saying that the Triceraton wouldn't be coming since the beacon was destroyed, with Raph commenting that he hope so. But what they didn't know is that brief moment the beacon was activated is enough for the Triceraton army to set out and invade the Earth.

Dinosaur Seen in the Sewers/Transcript 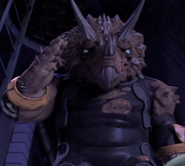 Return of the Kraang!