Donatello or Don/Donnie is one of the four main protagonists in Teenage Mutant Ninja Turtles and a member of the TMNT. He is the tallest turtle and best friend of April O'Neil, younger adoptive brother of Karai, younger brother to Leonardo and Raphael, and the older brother of Michelangelo. He is "The Brains" of the team.

The Group's Inventor and Weaponeer

"Hey. Donnie here. I'm the brains of this operation. I invent gadgets, weapons and awesome vehicles to keep me and my brothers safe. The only thing I can't figure out is to get our friend April to notice me. Can someone PLEASE help me on how to make April to notice me?!?"

Donatello is the team inventor and weaponeer. He creates all their gadgets from the simplest bo-staff to their incredible vehicles. He's utterly brilliant, able to cobble together fantastic stuff from things he's literally scrounged from a trash heap. He's obsessively detail-oriented and often impatient that his brothers can't keep up with him intellectually. But Donnie also happens to be the most reclusive and socially awkward of the Turtles - especially when April is on her way!

Donatello and his brothers were once ordinary turtles; when they were infants, they were adopted from a pet store by Hamato Yoshi. When their soon to be father walked passed a strange man, a Kraangdroid, he felt something odd about him and followed. Unfortunately, Yoshi gave away his position when he accidentally stepped on a brown rat's tail. The Kraang found him and attempted to kill him, but Yoshi fought back hard. In the end, the Kraang dropped the canister of Mutagen they were holding causing the turtles and Yoshi to mutate. Yoshi, having to have stepped on that rat last, thus mutated into a humanoid brown rat by the name of "Splinter", while Donnie and his brothers, after coming in contact with Splinter when he was human, mutated into humanoid turtles. Splinter knew they would never be accepted in society, so he took them to the sewers, made a home down there, and made the four turtles his children. Knowing the world would be dangerous and there would be a time where they want to explore the outside world, Splinter trained the boys in the art of Ninjitsu. Donnie and his brothers were named after great Renaissance artists from a book Splinter fished out of the storm drain.

Donnie is a mutated turtle with brownish green skin. Unlike all his previous incarnations, Donnie has a gap in between his teeth. Like most incarnations, he wears a purple mask where the tails of the mask are longer than any of his brothers, except for Raph's. Unlike previous incarnations, he is tall and thin with brown/red eyes. His quiet and shy nature gives him a more professional look, which comes across as the strong silent type. He is good with machines and has a talent for making new technology for his brothers. But there's one thing he hasn't gotten right... getting April to notice him.

Donatello is quiet and more reserved than his brothers. He does not have Mikey's outgoing nature or ability to make friends quickly, but his loyalty to the friends he does make is considerable. He also has a tendency to take things personally and deeply to heart, such as the care and protection for The Pulverizer and being the most upset by April's departure after the mutation of her father. Donatello is a bit awkward in social situations; having neither Leo's charisma or Raph's indifference to what people think.

Donnie is not without faults. He is nervous, tense under pressure, easily annoyed and, while not prone to regular bursts of anger like Raph, he can lose his temper, especially when technology fails or performs ineffectively. He is also rather romantic and very loving. He is able to appreciate the love between his father Splinter and his late wife, Tang Shen.

Donnie is particularly skilled, having "a way with machines" and is the most intellectually inclined of the siblings. Of all of the turtles, he has devoted more of his time to non-combat oriented pursuits, such as the study of technology, biology, chemistry, mathmatics, and metallurgy. This makes him very nerdy, especially in the eyes of Raph. Donnie is the 2nd most mature out of all his brothers, aside from Leo, and often is the voice of reason and logic. In previous incarnations, Donnie is seen as second-in-command, but no such title has been established in this series, thus far.

Donnie is a skilled martial artist but often puts more faith in his gadgets and machinery than the more traditional methods taught to him by Master Splinter. Donnie tends to clash with Leo over these "traditional methods", as seen with Metalhead and later, the Turtle Mech.

Inventive and detail-oriented, Donatello may be the only mutant turtle that doesn't mind a little time indoors. After all where would the ninja teens be with all incredible battle creations? From the Shellraiser to the robot Metalhead, Donatello's mind is just as sharp as the blade on his Nginata bo-staff! 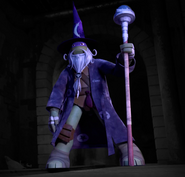 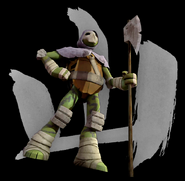 Ninjutsu: Like his brothers, he is a master ninja and is very agile, able to leap over rooftops and avoid attacks from enemies, including gunfire, weapons, and punches and kicks.

Enhanced Strength: An regular turtle can pull 5x its body weight. He and his brothers have been mutated and have had years of training under a grand master of martial arts, so their strength has been amplified as a result.

Enhanced Speed: Despite being a turtle, he is not slow. He can run fast enough to avoid laser fire from a Kraang weapon. He can also move things at enhanced speeds too, such as twirling his bo-staff.

Stealth: Like his brothers, he is stealthy, can hide in the shadows, sneak around without being detected, and use hand to hand combat.

Naginata: His bo-staff has a built switch blade on one end.

Shell: He has the normal ability of a turtle to get into his shell.

Healing Factor: He was able to take numerous hits from mutants like Dr. Tyler Rockwell, Dogpound and Slash, seriously injuring himself and was still able to fight. He also was able to fight Shredder but was hurt by him.

Intelligence and Communication: He is incredibly intelligent able to calculate complex equations in his head, create different machines and handle the creation of medicines and other chemical compounds. He enjoys tinkering with items he finds in the junkyards and in the abandoned part of the sewers, which have allowed him to make the Shellraiser, the T-phone and Tpod. Donatello also is a master of strategy and helps Leonardo as a tactician in many of the more involved and complex missions. Touched by his father as human given the power to speak and understand perfectly human English.

Stamina and Endurance: Due to his ninjitsu training, he has a great deal of stamina, which allows him to keep up with his training. A good exhibition of his stamina is seen when Donatello is training the Pulverizer. He able to take hits better then Mikey can take, but not as good when compared to Leo and Raph.