Journey to the Center of Mikey's Mind is the 6th episode of Season 4 and the 84th episode overall.

When microscopic aliens invade Mikey's mind, the Turtles have to chase them through the strange world of Mikey's subconscious.

Arriving at a space cantina where a criminal contact of the Fugitoid, Vrax Belebome, is waiting with information on the schematics of the Triceraton Armada flagship to give to the Turtles so they can infiltrate the flagship and steal the first piece of the Black Hole Generator back from Captain Mozar, April and Casey are asked to stay behind in the Ulixes due to how since they are humans, the aliens won't take too kindly to seeing Terrans in the cantina. The Turtles, due to being mutants, will blend in just fine.

Upoon entering the cantina, Mikey ends up running afoul of Belebome when he causes Belebome to spill his platter from bumping into him. Thankfully, the other Turtles and the Fugitoid are able to calm Belebome down and get down to business. The Fugitoid presents the amount agreed upon for the intelligence, but Belebome reneges on the deal, requesting a second payment of the same amount before he will hand over the schematics. Furious, the Turtles cause a gunfight between them and Belebome, with them taking back the cash and leaving empty-handed. However, Mikey's talking out loud about the Heart of Darkness is heard by Belebome, intriguing him into seeing what Mikey knows about it. With that, he contacts the Neutrinos, telling them he's got a well-paying job for them...

Back on the Ulixes, as April and Casey learn of what happened, while they and Mikey's brothers head to the holodeck to vent some steam, Mikey dozes off watching television, allowing the Neutrinos, small microscopic aliens, to land on his shell and infiltrate his body. He momentarily wakes up with bloodshot eyes, but soon is knocked out cold. When the others find him, and Casey is unable to even wake Mikey by wiping a slice of pizza across his head, the Fugitoid realizes the severity of the situation and knows it is the Neutrinos' work, and they have to hurry to stop them before they destroy Mikey from the inside out by capturing his inner self.

While April is asked by the Fugitoid to assist in the rescue with her psychic powers from on the outside with the Fugitoid and Casey, Leo, Raph, and Donny prepare to have their minds enter Mikey's to save it. However, before they can change their minds upon learning of what will happen if they get zapped by the Neutrinos while in Mikey's mind, they are transferred in.

After watching Mikey be pursued by the Neutrinos, they end up coming across several of his various personality traits, before realizing that whenever Mikey gets stressed out in battle, he retreats to his imagination for safety. After giving the password to enter Mikey's imagination, the other Turtles find a younger Mikey, his inner self, safe and sound, only for the Neutrinos to soon breach the area in their mission to capture him. However, with the aid of all of his friends and allies from his imagination, along with his brothers, Mikey is able to defeat the Neutrinos and send them packing.

When the Turtles wake up and Mikey learns of what had transpired, when he sees the Neutrinos attempting to escape in their ship, furious, he catches them and squishes them underfoot in revenge for what they put him through.

Back at the cantina, Belebome is taking to Lord Dregg about the info the Neutrinos were going to deliver him, when he is forced to end the call when he finds the Turtles, very angry with his little act with the Neutrinos, especially Mikey, looming over him. Wanting to avoid trouble, Belebome concedes and hands over the drive containing the schematics for the Triceraton flagship, but Mikey gets his payback by eating one of the alien delicacies that Belebome was about to eat, then unleashing a nauseous belch into the alien's face, knocking him out cold. With the schematics secure, the Turtles prepare to take back the first piece of the Black Hole Generator.

When we see fat Mikey eating pizza and he sees the turtles and says "Feed me" This is a refrence to Audrey II from Little Shop of Horrors when he says "Feed me Seymour." 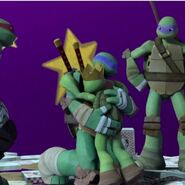 One of Mikey's Personlaity , his hunger
Add a photo to this gallery

Retrieved from "https://tmnt2012series.fandom.com/wiki/Journey_to_the_Center_of_Mikey%27s_Mind?oldid=75021"
Community content is available under CC-BY-SA unless otherwise noted.