Start a Wiki
Leonardo fights in a style known as Niten Ichi-ryu, "The strategy of two heavens as one". This technique revolves around the use of the katana and shorter wakizashi in tandem. Leo's blades are shorter and straighter than traditional weapons wielded by Samurai. This makes them sturdier, faster, easier to conceal, and perfect for a ninja! Leonardo uses them as his main weapon in TMNT. The handles have the same dark red and gold color that Raph's sai and Mikey's nunchucks have. Unique from his brother's weapons (Bo-Staff, Sai, and Nun-Chucks) Leo's weapons are the only ones specifically designed to deliver killing blows, though Leo is much too honorable to want to do so. You know what they say,"two swords are better than one."

This matches Leo very well as most lead protagonists wield a sword of some sort. The swords also represent Leo's sense of balance between strength, speed, and defense.

Mikey had used the katana swords once in both the episode "Pulverizer Returns" and The TMNT Adventure comic. With the swords in hand Mikey tried to act like the leader...which failed miserably; Splinter made him use the swords to teach the turtles to fight out of their element (though he nearly killed himself while handling it)

Leo's swords, whilst being referred to as "Katana", are actually "Ninjatō" (忍者刀 ninjatō), also known as ninjaken (忍者剣) or shinobigatana (忍刀), these swords seem to be a modern invention rather than a historically accurate one.

Leo leads the pack, slashing out a path with glinting double blades of fury. 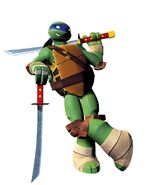 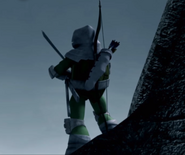 this is an original japanese katana... :) 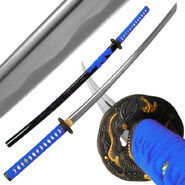 Add a photo to this gallery
Retrieved from "https://tmnt2012series.fandom.com/wiki/Katana_Swords?oldid=73343"
Community content is available under CC-BY-SA unless otherwise noted.