Leonardo or Leo is one of the four main protagonists in Teenage Mutant Ninja Turtles and a member of the TMNT. He is the Karai's younger adoptive brother, and older brother of Raphael, Donatello, and Michelangelo, and the eldest Male child to Master Splinter. He is "The Leader" of the team.

The Fearless Leader of the Group

"My name's Leo. I've got 3 rowdy brothers who always give me a hard time. But I keep them in line... usually. Master Splinter picked me to lead because I eat, sleep and breath Ninjustu. Not that my brothers aren't good, I'm just better. But nothing can get in my way in protecting my family."

The leader of the Turtles, Leonardo aspires to be a brave, decisive, perfect hero. Unfortunately, he's an inexperienced teen (for the moment at least) with three smart-aleck brothers. It's the gap between his aspiration and current situation that is the greatest source of frustration in Leo's life. He's the most driven of the four Turtles, training and studying relentlessly. He tends to be hard on himself, but his diligence does not go unnoticed; he is the favored student of Splinter, whose approval he very much craves.

Leonardo and his brothers were once ordinary turtles: when they were infants, they were adopted from a pet store by Hamato Yoshi. When their soon to be father walked passed a strange man, a Kraangdroid, he felt something odd about him and followed. Unfortunately, Yoshi gave away his position when he accidentally stepped on a brown rat's tail. The Kraang found him and attempted to kill him, but Yoshi fought back hard. In the end, the Kraang dropped the canister of Mutagen they were holding, causing the turtles and Yoshi to mutate. Yoshi, having to have stepped on that rat, thus mutated into a humanoid brown rat by the name of "Splinter", while Leo and his brothers, after coming in contact with Splinter when he was human, mutated into humanoid turtles. Splinter knew they would never be accepted in their urban society, so he took them to the sewers, made a home down there, and made the four turtles his children. Knowing the world would be dangerous and there would be a time where they want to explore the outside world, Splinter trained the boys in the art of Ninjitsu. Leo and his brothers were named after great Renaissance artists from a book Splinter fished out of the storm drain.

Leo is an emerald green colored mutant turtle with sapphire blue eyes. He wears a blue mask where the tails length range between Donnie and Mikey's. Like Raph, Leo doesn't have much changes to his physical appearance like all his previous incarnations, except for the fact that his green skin is slightly darker than the others. His height ranges between Raph and Donnie's.

Like the intro states he is the leader and makes the commands which sometimes bothers his brothers especially Raph. Leo is the most serious and disciplined out of all the turtles and is of course their leader. He has a lot of responsibility on his hands, which can sometimes overwhelm him. He watches a T.V. Show called "Space Heroes" and wants to be just like the captain he sees on T.V. Overall, Leo acts as a big brother to the turtles and as a teacher's pet to Master Splinter. He was chosen to be the leader because of his willingness not by his skill. Leo is the most mature out of all his brothers, aside from Donnie, always acting like a guide and sometimes even a parent to his brothers. He is very protective of his siblings and is willing to do anything for them. Unlike all his incarnations, Leo is somewhat a sci-fi geek, aside from Donnie. Though Donnie is more of a techy geek. Leo loves "Space Heroes" and tends to try to be like the hero on there, much to the annoyance of his brothers. He also tries too hard to act like a hero and says cheesy lines, which annoy Mikey, Donnie and Raph. He is the wisest, most experienced and balanced of the team and demonstrates many important qualities needed in a leader. Leo does his best to lead the team, but he sometimes second-guesses himself and his constant sibling rivalry with Raphael can cause problems for the team and puts a strain on his relationship with Raph. He often tries to compare himself to the main character of "Space Heroes", Captain Ryan, which annoys his brothers. Like other incarnations, Leo is a perfectionist. He developed a crush on Miwa/Karai.

Hardworking, honorable and respectful, Leonardo is the Turtle's fearless leader. Driven to be the perfect hero, Leo's inexperience and often rowdy brothers sometimes get in the way of his goal. 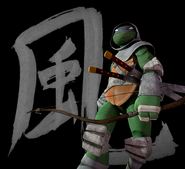 Ninjutsu: He is an extremely skilled martial artist and swordsman. Like his brothers, he is a master ninja and is very agile, able to leap over rooftops and avoid attacks from enemies, including gunfire, weapons, and punches and kicks.

Enhanced Strength: He is pretty strong when it comes to defense and counter attacks and he is mainly a well balanced ninja. Since an actual turtle can pull 5x its body weight, he and his brothers have been mutated and trained for 15 years as master martial artists by Master Splinter, so their strength has been amplified as a result.

Enhanced Speed: Despite being a turtle, he is not slow. He can run fast enough to avoid laser fire from a Kraang weapon. He can also move things at enhanced speeds too, like twirling his katana blades.

Stealth: Like his brothers, he is stealthy, can hide in the shadows, sneak around without being detected, and use hand to hand combat like a real ninja.

Katana: He uses katana blades in a traditional niten-ryu style.

Shell: He has the normal ability of a turtle to get into his shell.

Healing Factor: His healing factor seem to work while in water, where he woke up after the villainous fight 3 months later but the fight left him very injured.

Intelligence: He has a good line of defense, and is the best at planning strategies.

Stamina and Endurance: He shown off his high stamina in The Invasion, he was able to handle and stay much alive while the long Foot-Bot challenge, he was also able to defeat all of Shredder's henchmen, but all that work worn him out giving Shredder the chance to finish him off.

Healing Power: He was taught how to use ninjitsu to heal himself and others using a special technique by Splinter. It was effective in removing venom that had no cure.

Interactions with Other Characters