Michelangelo or Mike/Mikey is one of the four main protagonists in Teenage Mutant Ninja Turtles and a member of the TMNT. He is the youngest brother of Karai, Leonardo, Raphael, and Donatello, and the youngest son of Master Splinter. He is "The Wild One" of the team.

"Mikey here. I'm definitely the funnest of all my brothers. I love video games, skateboarding, pranking my brothers and duh, pizza!! Who does NOT like New York City Style Pizza? I mean, THEY'RE THE BEST!!! Speaking of pizza... I'm hungry."

Physically the smallest of the Turtles and the least mature. Mikey is easily distracted and enthusiastic about... well, pretty much everything. He's also extremely creative. He has a thousand ideas, and every now and then, one of them will be brilliant. This combination of creativity and lack of focus gives him a kind of "flow" that the other Turtles cannot match. He's a social mutant and more than the others, pines to be part of the real world.

Michelangelo and his brothers were once ordinary turtles; when they were infants, they were adopted from a pet store by Hamato Yoshi. When their soon-to-be father walked passed a strange man, a kraangdroid, he felt something odd about him and followed. Unfortunately Yoshi gave away his position when he accidentally stepped on a brown rat's tail. The Kraang found him and attempted to kill him, but Yoshi fought back hard. In the end, the Kraang dropped the canister of Mutagen they were holding, causing the turtles and Yoshi to mutate. Yoshi, having to have stepped on that rat, thus mutated into a humanoid brown rat by the name of "Splinter", While Mikey and his brothers, after coming in contact with Splinter when he was human, mutated into humanoid turtles.

Splinter knew they would never be accepted in society, so he took them to the sewers, made a home down there, and made the four turtles his children. Knowing the world would be dangerous and there would be a time where they want to explore the outside world, Splinter trained the boys in the art of Ninjitsu. Mikey and his brothers were named after great Renaissance artists from a book Splinter fished out of the storm drain.

Mikey is a light green Mutant ninja turtle. Unlike all of his previous incarnations, Mikey has freckles. Like all in incarnations, however, he wears an orange mask, though like his 1987 and 2003 incarnations, the tails of his mask are shorter. Mikey is shorter than his brothers and is considerably shorter than Donatello. Mikey also seems to be a little more pudgy than his brothers. The animators gave Mikey baby blue eyes to make him look slightly more 'innocent'. However, like all of the Turtles when they're in combat, the pupils and irises vanish from his eyes, leaving him with plain white bits, which are similar to that of the 2003 incarnations.

Mikey is the youngest of all the turtles, making him the least mature, however, it was confirmed that his maturity slowly increases as the episodes go on. He is labeled as "The Wild One" and "The Party Dude" as he is the most "fun" out of all the turtles. He is also very social, and wants the outside world (humans) to accept him and his brothers. He is also impulsive, because of a severe case of ADD. He is the first of the turtles to taste pizza and is very proud of his talent for naming things. In battle his weapon of choice is a pair of nunchakus, and a kusarigama. He might seem unintelligent to his apparent disregard for thinking things through, but he is actually intelligent. Unfortunately he also isn't always the most considerate of the ninja turtles like when he tried to use Raph's fear of Cockroach Terminator to get Raph to let him read his comics, or when he pranks his brothers. But he also has an honest heart and is more willing than the other turtles to accept outsiders like Karai/Miwa and Leatherhead.

Impulsive, creative and very social, Michelangelo is the heart and soul of the Ninja Turtles. The runt of the litter, he may be the smallest of his mutant brothers, but that doesn't make him the weakest (just harder to catch). Enemies beware! Michelangelo is a master of the Kusarigama, nunchucks with a secret and sharp surprise! 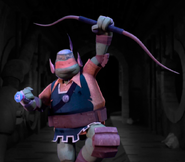 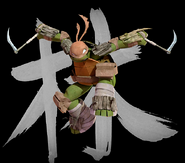 Ninjutsu: Mikey is the most agile of all his brothers; his training as a ninja helped to balance and improve this, but his skills in skateboarding and dancing also gives Mikey an edge that will often shock his brothers. Mikey is an extremely good fighter. He's got a great knowledge with ninjutsu, which is why he is a good fighter. He may have the most raw talent of the four, but he does not seem to have the skill or the inclination to develop it.

Pranks: He refers to himself as the king of pranks. Since he the most funniest of his brothers and he hasn't shown to be wrong since he was able to show his pranking skills against his brothers like water balloons as he wants to prank them all and he was able to use his prank of water ballon to use against the tank of the truck.

Teaching: He has shown Napolean the right way of Ninjutsu correctly as he was shown great success as he may not be the great Ninja turtle for thinking of correctly of logic from his brothers but he proven to teach others to fight well.

Enhanced Strength: Since regular turtles are able to lift 5x their own body weight, his strength is likewise altered. His ninja training with Master Splinter has helped to improve and condition his strength. He isn't quite as strong as Raph, but he was able to throw barrels over his head against Spiderbite.

Enhanced Speed: He can run much faster than an athletic human.

Stealth: Mikey has the ability to move in the shadows, like his brothers. He is also very stealthy, but does not enjoy when stealth is used on him.

Kusarigama: His nunchucks has a built-in switchblade on one of the bars.

Balance: Mikey's skills as a skateboarder and a ninja give him a great ability with balance.

Shell: He has the normal ability of a turtle to go into his shell.

Cooking Skills: He shows to love to cook for his family even though his brothers don't think his tastes great but to Mikey it does. Leatherhead seems to love his cooking skills. (Probably because he has never eaten anything delicious)

Shadow Puppet Skills: He able to make different shadows out of his hands very well to be appear realistic of different objects. He used this to decive the Kraang, Fishface, and Rahzar.

Intelligence and Communication : He not the smartest of like his brothers are but he makes it up for knowing comics and naming creatures. As he shown to be excellent naming creatures if their appearance, abilities or powers. Just like any other creature mutated of humanoids able to speak. He also use his comic intelligence to defeat the mutation Squirrels and true genius in Dimension X. He is typically smarter than his brothers believe him to be, for he is capable of creating antidotes and retro-mutagen from random ingredients, though his brothers continue to doubt his intelligence for obvious reasons for example when Mikey sprinkled botched retro-mutagen onto his skin when Donnie had clearly labelled it as being dangerous.

Endurance and Stamina: Mikey's ninja training helps with his stamnia, as he is able to withstand attacks and hits from enemies that might otherwise incapacitate a human showing his endurable body. But he shown that true strong opponents he will lose and can become unconscious.

Interactions with other characters