"Mousers Attack!" is the 11th episode in Season 1 of Teenage Mutant Ninja Turtles. It premiered on December 8th, 2012.

"United by brotherhood, divided by skill."

When simultaneous threats from the Purple Dragons and Baxter Stockman's mechanical Mousers force the Turtles to split up into two groups, Michelangelo and Donatello try to prove that their 'B Team' is just as valuable as Raphael and Leonardo's 'A Team'.

This episode opens with the Turtles in the middle of one of their training sessions. As per usual, Raph initiates an arguement between Leo and himself. Master Splinter, having had enough of this bickering, strikes the pressure points in their throats and tells the two of them that, while competition is an excellent motivator, it should not turn them against each other. He then orders them to fight side by side in a spar against Mikey and Donnie. Leo and Raph sneer that that would be unfair, believing to be better than their brothers. Mikey and Donnie respond by immediately taking offensive poses, as do Raph and Leo, who become the victors of the ensuing duel.

Meanwhile, Dogpound informs the Shredder that he has intimidated the Purple Dragons into increasing the Foot Clan's cut of their take. This indicates to the Shredder that Dogpound's mutant form has its advantages, in stark contrast to Xever Montes, who has no way of leaving his aquarium 'imprisonment'. Dogpound revels in his rival's predicament, torturing him by tapping loudly on the glass, which creates a sound effect that gives Montes a headache. Montes then dares Bradford to come into the water so that he can harm him, but the Shredder tells Montes to stop and that, right now, he is in no position to be a fighter. This causes Montes to back down. The Shredder then orders Dogpound to find him the information about Splinter that he could use...or else Dogpound will receive another small punishment.

Back at the Lair, Raph and Leo (though Leo attempts to make them feel better without much success) are still giving Mikey and Donnie a hard time about their roles in the team and, after they all watch a Space Heroes episode where two minor characters are disparaged for being weak in the face of danger, Raph label's Mikey and Donnie 'The B Team' after Mikey claims they think of him and Donnie as a 'B Team'. April then comes into the lair after having been mugged for her phone by the Purple Dragons. The Turtles instantly decide that they should teach the gang a lesson and get that phone back, but Splinter has a say in the situation, acknowledging that a simple cell-phone should not give rise to a large battle, which April agrees with. However, the boys believe that the gang can cause them no harm and leave anyway, leaving Splinter and April to continue her Kunoichi training.

The Turtles bust into the Purple Dragons' hideout and easily defeat the gang, with Leo and Raph being the predominant aggressors, much to Donnie and Mikey's annoyance. They demand to see the gang's stash of stolen goods, with Leo mentioning that they want a phone stolen from a friend of their's. Just after they walk a short distance to the gang's stash and locate April's phone, the building begins to shutter and dozens of small, bipedal robots with big, fang-filled mouths burst through the floor and proceed to escape with the gang's valuables in their mouths. The Turtles destroy the remaining robots, but, during the confusion, the gang leader, Fong, is able to escape the building with April's phone in his hand. Leo orders the "B team" to go after the phone at all costs, while he puts himself and Raph in charge of destroying the robots. Donnie and Mikey comply, still stung by all of the "B team" comments. Leo and Raph follow the tunnel created by the robots, as do the two remaining Purple Dragons, in secret. Leo and Raph soon emerge in an old warehouse and discover that Baxter Stockman is the person behind the creation of these robots. He created these "Mousers" (Mobile Offensive Underground Search Excavation (and) Retrieval Sentries) to not only steal for him and to make him extremely rich, but also to annihilate the Turtles and those who wrong him. Suddenly, he sprays Leo and Raph with a red mist that seems to be harmless at first, but somehow causes the Mousers to home in on them. The two Turtles easily destroy the few Mousers that are around Stockman, who then reveals that he has hundreds more hidden in a secret compartment. The boys retreat with an army of robots on their heels. As Stockman begins to gloat, he is hit in the back of the head and abducted by the Purple Dragon members Tsoi and Sid. Leo and Raph are chased all across the city, fighting as they go. They try to use every tactic that they know of to fool the robots, but they can't. They try to use a nearby water pipe to rinse the spray off, but to no avail. They know in the back of their heads that their most ideal option would be to call Donnie and Mikey for help, but Leo and Raph want to avoid being exposed as 'weak' in front of their brothers. They keep on fighting, but the supply of Mousers seems to be too much and the two turtle brothers are beginning to tire out. Leo finally has to step up and call Donnie for help.

Meanwhile, Mikey and Donnie have trailed Fong to a defunct futon factory, where the Purple Dragon member hands April's phone over to Dogpound, telling him that it belongs to a close friend of the Turtles. Not long after, the two other gang members show up with Stockman. Dogpound, after being told the things that Stockman has done, wants Baxter disposed of, but the scientist mentions that his Mousers are destroying two of the Turtles at the very moment. Realizing that he and Stockman have a mutual hatred for the Turtles, Dogpound orders the meek scientist to hack into April's phone, as he is good with electronics. With its built in GPS system, the Foot should be able to see every place that the phone has been, including The Sewer Lair, which means that they could know Splinter's exact coordinates. Meanwhile, Donnie answers Leo's call for help, but Leonardo ultimately denies that he needs any help and is somewhat shocked when he hears that Mikey and Donnie are actually getting somewhere in retrieving the phone. Leo then hangs up on him. Donnie has come up with several (possible) maneuvers to retrieve April's phone, one of which includes making the villains think that the police have arrived, while Mikey has humorously named every one of them. Finally, however, the two turtles settle on cutting the power to the building and snatching the phone in the darkness while Dogpound's senses are (hopefully) briefly impaired. The two almost succeed in achieving their goal, but are caught by Dogpound, who hears their movements and chains them to a wall.

Meanwhile, Raph and Leo have chosen to run away from the Mousers again. The two do end up making light work of the robots, especially when they collapse a street light that comes into contact with water from a fire hydrant, electrocuting the Mousers in the vicinity. However, Leo and Raph are confronted by even more, forcing Leo to call his brothers for a second time. Dogpound finds Mikey and Donnie's T-Phones when they start ringing, and takes them away. Before they can be hacked into, however, Donnie commands the phones to self-destruct and both of them blow up in Dogpounds hands. Just as Baxter is about to finish uploading a decryption program onto April's phone, Raph and Leo burst in. Stockman demands to know how they escaped from his Mousers and Leo simply replies "We didn't." As the robot horde bursts into the building through its skylights, Leonardo frees his brothers with his Katana blades, while the three Purple Dragons flee in panic. Mikey gets his hands on April's phone, automatically drawing the attention of Dogpound. Donnie figures out how the Mousers have been tracking Raph and Leo. The red spray is some sort of radio-isotope that the Mousers were programmed to detect with a device on top of their heads. The chemical cannot simply be washed off and must be worn off over a gradual period of time, but if someone were to be sprayed they would give off a much stronger signal. Thus, Raph hits Stockman's spray can with two Shuriken, causing the isotope spray to backfire and blast Dogpound and Stockman. The Mousers suddenly home in on those two. Dogpound finally gets his hands on April's ringing phone, but it gets knocked away and obliterated by a Tanto thrown by Donnie. Dogpound flees, grabbing Stockman along the way and bursting through a brick wall with a few dozen Mousers in pursuit. Leo and Raph congratulate Donnie and Mikey, and Raph resolutely dubs them the "A minus team", because of their efforts. Donnie muses that this is probably the best that they will get out of him.

Back at the Lair, all of the brothers relax. Mikey break-dances and Raph feeds Spike leaves, while Leo and Donnie play some pinball together. Splinter enters the scene and tells the Turtles that, by choosing their battles poorly, they created their own crisis to deal with. Leo then gives April her (broken) phone back, but it shatters in her hands. Leo comments that the important thing is that the phone did not end up in the wrong hands. In spite of Leo's words, April is upset, though Donnie shows her a T-Phone and offers to replace her old phone with it. However, Mikey immediately, verbally, and accidentally causes the T-Phone to self destruct on her hands once she has received it.

At the Foot Clan HQ, Dogpound, after having narrowly escaped the Mousers, arrives with Baxter and sets him down on the walkway. The Shredder appears and criticizes Baxter for his interference, sneering that Stockman should pay the ultimate price for it. Despite the Shredder's anger, he acknowledges that he has use for Stockman's skills, and the episode comes to an end with Dogpound motioning his hand and Baxter looking at him in fear.

"One cannot predict the consequences of battle. Every fight has the potential to stir a hornets' nest."

"By choosing your battles poorly, you create your own crisis." 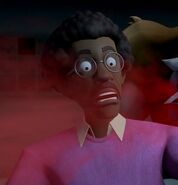 Retrieved from "https://tmnt2012series.fandom.com/wiki/Mousers_Attack!?oldid=74019"
Community content is available under CC-BY-SA unless otherwise noted.