Muckman is an ally of the Turtles. Once a humble sewer worker-turned-garbage man named Garson Grunge, he was hit with a canister of Mutagen Ooze and became a mutant pile of living garbage. He may look scary in his appearance, but he is actually quite friendly.

Not much is known about Garson Grunge's origin except that he was born in Camden, New Jersey.

It Came From The Depths: When Grunge makes his debut in this episode, he is attacked by Leatherhead and interviewed by Joan Grody

Invasion of the Squirrelanoids: Grunge finds a bag of popcorn and is attacked by a Squirrelanoid. Muckman is seen on a poster on Michelangelo's wall.

Fungus Humungous: Grunge appears running in the sewers past April O'Neil and Casey Jones, afraid of a "giant mutant squirrel".

Pizza Face: Grunge is shown among the victims of Pizza Face.

Battle for New York: Grunge makes a cameo appearance among the crowd of people who just got cured to be humans again.

The Noxious Avenger: Grunge is seen working as a garbage man when he gets hit in the face with a canister of Mutagen while investigating a commotion involving a fight between the Turtles and Bebop and Rocksteady. Having to have fallen into the dumpster, he mutates into a 6-foot-tall humanoid being made entirely out of garbage with an empty right eye socket and a half-exposed skeleton. Convinced by Joe Eyeball to be a hero when he finds the Purple Dragons mugging a man and manages to beat them up. The man witnesses the action and this makes it to Joan Grody's show as he becomes New York's new sensation, and giving the mutated Grunge a movie-based nickname, "Muckman". The Turtles and April find Muckman and Joe Eyeball where he blames the Turtles for his mutation yet both groups had to leave before Joan Grody could get a glimpse of the Turtles. Upon seeing the news of Muckman, Rocksteady and Bebop plan to take advantage of this and look for Muckman. When Rocksteady and Bebop find Muckman, he thinks they are with the Turtles until they claim that they aren't with him. He asks if the Turtles mutated them too and Bebop says yes. Muckman is convinced by Rocksteady and Bebop to help rob an abandoned Kraang lab claiming it contains a cure, and Joe Eyeball becomes suspicious of Rocksteady and Bebop's motives. The Turtles catch up to them as Muckman begins to attack. Bebop tells Muckman to get the chemical while he and Rocksteady get the Turtles. Muckman joins the fight and the Turtles are defeated. The Turtle try to reason with Muckman but they are all knocked out by Bebop's grenade. Rocksteady throws Muckman into the lab and is blasted by the Kraang's traps. Muckman finds the chemical and is blasted by another trap. Rocksteady takes the chemical from Muckman who is then helped by the Turtles. Muckman shoots slime at Rocksteady and Bebop, who retreat when the chemical explodes. Muckman covers up the Turtles existence by telling Joan Grody that they were just people in costumes like The Pulverizer.

Annihilation Earth: Muckman fights the Triceratons along with his fellow Mutanimals. He saves Mondo Gecko from being stomped to death by Triceraton warriors, but is killed when Earth is destroyed. 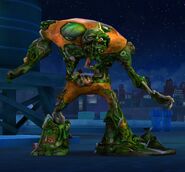