Mutagen (A.K.A "The Ooze") is a chemical substance that comes from Dimension X, and the reason why the Ninja Turtles (and many of their friends and foes) were created into what they are today, mutants. Not much is known about the Ooze or how it works, but we do know that The Kraang have brought it to Earth to perfect it and test it on many humans, since the physical laws of our world are different from theirs. In "Into Dimension X" Leatherhead used a Kraang Communication orb to inform the turtles the Kraang have perfected the mutagen, and are about to invade. In "The Invasion" The Kraang invade with Kraang Prime, who is stomping around New York City with a tank full of perfected mutagen, and start mutating the city, turning buildings into crystal, and mutating people into Kraang-zombies.

The Ooze comes from the glands of Kraathatrogons. The Kraang "milk" them to receive Mutagen.

So far, it has been established that, after hit with the Ooze, the being (whether it be a human or animal) gets its DNA mixed with the last living thing(s) it touched, resulting in a mutant (similar to the 1987 cartoon). However, Leatherhead was mutated in The Kraang's dimension and just turned into a more intelligent and larger alligator. This adds to the fact that the Ooze works different on Earth than in The Kraang's dimension. Yet, this also happened to the turtles and Splinter when they were exposed to it, so this may just happen to non-human creatures if no other DNA is present. Also if human came in contact with Mutagen but did not recently come in contact with an animal or plant the result would be something like Mutagen Man. Sometimes, living creatures also mutate with inanimate objects, making results like Pizza Face or Ice Cream Kitty. Also, if a mutant happens to come in contact with mutagen again, it mutates it further, enhancing all of its current abilities and could also result in new abilities as well. But the Kraang mentioned the Ooze is unpredictable, so that may mean that not all mutations have the same result. Also, in certain cases, some mutations can make victims lose their sapience like WingNut and Mutagen Man for example. When it was perfected it can turn living things into Kraangazoids (zombie like humanoid Kraang) and inanimate objects into crystal.

This is a list of Mutants in the show (characters who have been mutated from the ooze). 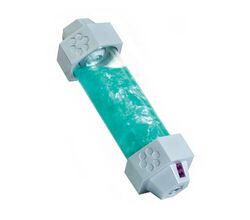 The toy variant of the Mutagen Ooze 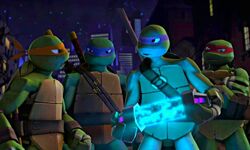 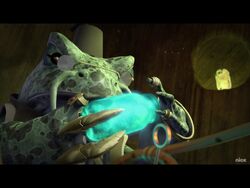 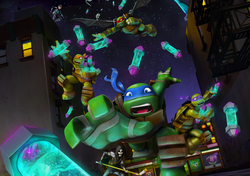 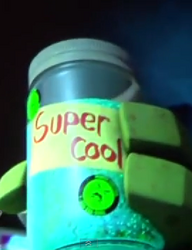 Add a photo to this gallery
Retrieved from "https://tmnt2012series.fandom.com/wiki/Mutagen_Ooze?oldid=73696"
Community content is available under CC-BY-SA unless otherwise noted.