"New Friend, Old Enemy" is the 4th episode of Season 1 in Teenage Mutant Ninja Turtles. It premiered on October 13th, 2012.

"Be careful about who you meet on the internet."

To prove that Turtles can be friends with humans, Michelangelo uses a social networking site to befriend Chris Bradford, a famous martial artist who is secretly Shredder's top lieutenant.

The episode opens (in a dojo) with an unknown ninja engaging in some form of meditation, his face completely concealed by a helmet made of steel. Suddenly, three Foot Clan ninjas emerge from the shadows and approach the meditating ninja, Katanas in their hands. The masked warrior easily defeats the three in combat. Then, it's revealed that these ninjas belong to the Shredder's clan and that their attack on the masked ninja was just to ensure that he was sharpening his skills, as he is the Shredder's finest pupil and most trusted assistant. Sliding open a nearby door, the Shredder informs his prized pupil that Hamato Yoshi survived his and the Shredder's last battle and has gone into hiding in the city (New York), along with ninjas of his own. Ordered by the Shredder to find Splinter and his disciples (and destroy them), the helmeted warrior steels himself to attain this end alongside a commission of Foot ninjas and Xever Montes, a delinquent henchman of the Shredder's with whom he shares a rivalry.

We then join the Turtles as they leap from one city rooftop to the next in the name of entertaining each other. They then hear a noise and quickly draw their weapons, only to round a corner and encounter a small cat that has its owner calling out to it. Mikey instantaneously goes to return it to the man, although his brothers warn him that the person will definitely freak the shell out at him. However, Mikey refuses to believe any of them and goes anyway, as he is under the impression that he can make the man his friend by returning the cat to him. In spite of this, the man does indeed "freak the shell out", as does the cat, which leaps onto Mikey's face, causing the turtle to fall down a nearby escape ladder. The other turtles try to convince Mikey that any human on Earth could never accept who he is, but Mikey doesn't listen to them. He then takes note of a billboard that is promoting a famous martial artist known as Chris Bradford who owns a chain of dojos, located in multiple cities. Mikey maintains that he and Bradford are destined to be soul mates, for they probably have alot in common. Raph remarks that Bradford would be the last person to want to be a friend of his - tied for last with every one else on Earth...

Just as the Turtles prepare to head back home, a large squad of (Foot) ninjas confront them in combat, correctly presuming that they are Yoshi's disciples because of their ninja attributes. As the Turtles begin to fend off the ninjas, Donnie expresses his surprise that there are other ninjas inhabiting the city. The Turtles manage to outwit the horde of ninjas in battle, Leo remarking that it's nice to be fighting ninjas instead of random mutants. However, Leo's joy is short-lived, as the masked man (seen previously) jumps down from a roof and outmatches the four turtles in mere seconds with simple movements. The Turtles and opposing ninjas get back on their feet and prepare for another face-off when approaching police sirens ultimately discourage them. Once the Turtles have made it back to their lair, Leo complains about the fight not being a fair one, as they were ambushed and outnumbered, and the masked ninja was really good at fighting. Splinter then asks Leo what he qualifies as a 'fair fight'. Leo contends that it's a fight that either side could win, but this contradicts Splinter's pragmatic thoughts about battle. Using his cane to knock Leo to the floor, Splinter pins his son before telling him that, in a battle, victory is to be sought, not fairness.

In the living room, Mikey remains depressed about not being able to find a human friend. April points out that he already has a human friend: her. Mikey replies that, since he and his brothers helped her out by saving her life, she is obligated to like him and, in his mind, that doesn't count...April then decides to borrow Donnie's laptop and shows Mikey a social networking website where he can befriend anyone on there without that friend ever having to see him. Mikey quickly finds Chris Bradford on here and sends him a request message to be one of his friends, which Bradford quickly and readily accepts. Excited, Mikey goes out to meet up with his new friend. April wonders if Mikey should be stopped, but Raph dismisses the idea, wanting Mikey to learn a lesson. Cut to Chris Bradford exiting a Boxing Club when Mikey appears and is about to introduce himself when he gets attacked by the ninja master. While dodging tons of Shuriken, Michelangelo manages to reveal that he was the one that Bradford just accepted as an online friend. Bradford, making peace with himself, chooses to invite Mikey into the unoccupied Boxing Club.

Mikey and Bradford see each other a couple of times that night, during which Bradford (who is, secretly, the masked student of the Shredder seen earlier) influences Mikey to believe that their friendship is intimate to tempt Mikey into sharing information about his brothers and sensei. As Bradford innocuously tries to start a conversation with Mikey about his sensei, Mikey comments that he'd love to tell Bradford, though acknowledges that there are some things about his sensei that he must keep secret, unknowingly confirming to Bradford that his sensei is Splinter. Afterward, Bradford reminds Mikey that friends should openly be able to share their secrets, thus Mikey asks Bradford if he will teach him his secret Kata, the Death Dragon. Much to Mikey's happiness, Bradford agrees to do this, but also makes Mikey promise not to show the kata to anyone. However, once Mikey gets back home, he immediately shows the kata to his brothers and they are all dazzled by its effectiveness. Mikey then receives a message from Bradford requesting him to come to one of his dojos for another get-together. Meanwhile, in that dojo, Bradford tells Xever that the 'freak' is on his way and that a trap has been set. Xever briefly examines the 400-year old Katana in Bradford's home and notes that it's a nice weapon for someone like him. Xever comments that, when he was in prison, he made weapons of his own. Bradford sarcastically replies to this comment, angering Xever. Not long after this exchange, Mikey enters the dojo, but doesn't see Bradford anywhere and believes that Bradford has planned him a surprise party. Then, Mikey is ambushed by both Xever and the masked ninja (Bradford). The masked warrior reveals to Mikey that he is Bradford. Mikey is saddened by this revelation, giving Bradford the opportunity to render him immobile and hogtie him with rope. Xever immediately wants to finish Mikey off, but Bradford reminds him that they need Mikey to serve as a part of their shrewd villainous scheme: to allow the other turtles to come get Mikey and to then trail them back to their hideout.

Back in the Sewer Lair, Raph and Leo spar while using the Death Dragon, but Splinter notices this. He nervously demands to know where they learned that kata. They explain that Mikey's friend taught it to him, and Mikey decided to pass the knowledge onto them. Splinter tells them that this man must be no friend, as the Shredder invented that Kata when he and Splinter were friends. Leo quickly realizes that Bradford is only pretending to be Mikey's friend to get to Splinter. Raph comes to the realization that Mikey is in trouble, so the three turtles rush out to rescue their young brother.

They reach the Bradford dojo and slyly break into it, unfettering Mikey from his restraints and escaping with him with a minimum of effort. However, as they escape into the sewers via a storm drain, they are watched by Bradford and Xever with binoculars. Bradford, Xever, and a legion of Foot ninjas follow the Turtles into the sewers in preparation to track them down. However, the Turtles silently yank the ninjas, one by one, into the darkness with rope upon noticing them. Xever and Bradford soon realize that they are alone, and Xever lights a flare. They look up, only to see that their band of ninjas are hanging helplessly from the cieling of the tunnel. Montes demands the Turtles to show their faces and the four brothers rise from the sewer water, weapons at their sides. A battle quickly ensues. Raph and Leo go after Bradford, while Donnie and Mikey go after Xever. Bradford and Xever both defeat their opponents, but Mikey and Donnie then fight Bradford and Leo and Raph fight Xever. This switching of opponents proves to be apt, as, this time, the Turtles outwit their opponents and corner them in front of a sewer tunnel. Mikey overpowers Bradford with the very kata that Bradford taught him, and Leo and Donnie then turn a wheel, mobilizing a torrent of sewer water that flushes Bradford and Xever over the side of a nearby ledge.

Later, back in their lair, the Turtles devour a Pizza, but they notice that their sensei isn't hungry. Splinter fears that they are celebrating far too soon, as the Shredder knows that Splinter is alive and now knows of the Turtles' existence. Leo then asks if the fight is over for now and Splinter replies that it's only beginning, as the Shredder has a countless number of men at his disposal. Meanwhile, Mikey is regretting the fact that he foolishly thought he could be the friend of a human. Raph, in strict confidence, tells Mikey that he is an awesome guy and that he deserves way better friends than 'psychotic killing machines'. Mikey now feels much better and "unfriends" Bradford on the social networking site, marveling at the revenge...

Primary Animation
Add a photo to this gallery 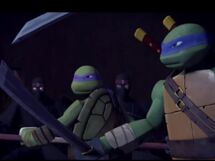 Add a photo to this gallery
Retrieved from "https://tmnt2012series.fandom.com/wiki/New_Friend,_Old_Enemy?oldid=74013"
Community content is available under CC-BY-SA unless otherwise noted.