View source
watch 01:36
We're Getting Mutants in the MCU - The Loop
Do you like this video?
Play Sound

The Nunchuks or nunchaku are a traditional ninja weapon. They consist of two handles (usually made of wood or metal) connected by a short chain. Like most ninja weapons, they were originally a benign farming tool, this one used for threshing grain. Nunchucks are used in pairs. Michelangelo uses them as his main weapon in TMNT. Mikey also uses his Kusarigama, which is similar to a nunchuck, but with only one handle with a sickle-like blade and a much longer chain with a weighted end. It was commonly used for keeping a foe at a distance and also worked well as a grappling hook.

In reality, no actual traditional kata exists for the nunchaku, likely due to the fact that it was an unpopular weapon due to its complicated use and its poor efficiency against weapons like the sword and spear. However, It seems Mikey has developed his own way of forming a kata out of it, making it the perfect weapon for Mikey as he has his own unique way of fighting.

A Kraang had once used Mikey's nunchucks when the turtles were captured in "TCRI" probably just out of curiosity. It was pretty good until it hit itself.

Raph had also used Mikey's nunchucks in "The Pulverizer Returns" When Splinter suggested the turtles swap weapons to learn to fight out of their element. Raph tried, but would always hit himself or the chain would wrap around him

In a TMNT Adventure comic, Leo used Mikey's nunchucks which he struggled at first but got the hang of it to help his brother defeat Baxter Stockman.

Michelangelo and the grappling hook

While Okinawan stylists had been practicing the nunchaku for years, it was not until Bruce Lee demonstrated them in a spectacular fight scene in his movie "The Chinese Connection" and the one to follow, "Return of the Dragon", that most people knew they existed. However, once the weapon was shown to the public, interest grew in exponential proportion.  From the streets of the inner city, where youths fashioned them from two sticks and a chain, to the formal weapons of Okinawan Dojo, teaching Kempo, Karate, and Kobujutsu, the weapons found great favor, mainly due to Bruce Lee's exceptional portrayal of them as the ultimate weapon.

However the interest in them was a mixed blessing. Because young thugs used them in street altercations, they ended up illegal in several states, and considered deadly weapons in several more. Thus, not wanting their character protrayed using an illegal (and easily homemade) weapon, the creators of the 1987 TMNT series wrote out Mikey's nunchaku and replaced it with a grappling hook. 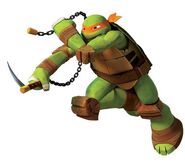 Mikey using his nunchucks in the first episode.