"Panic in the Sewers" is the 10th episode of Season 1 in Teenage Mutant Ninja Turtles. It premiered on November 24, 2012.

"How can you let go of something when you already fear it?"

The Turtles must defend their home in the sewers when the Shredder's henchmen try to destroy it with a dangerous chemical.

When we join the Turtles, they are sneaking through alley ways shrouded in a dense mist. They are quickly located by the Shredder and, one by one, Raph, Donnie, and Mikey are defeated and dragged off into the mist where they vanish. Before long, Leo is the last one standing and the Shredder overpowers him, tormenting that there is no place he can run or hide. He is about to deliver the finishing blow to Leo when Splinter awakens with a scream. The previous sequence of events were just part of a nightmare of Splinter's. He goes into the living room, only to find the Turtles preparing to leave on their evening patrol. He forbids them to go, reminding them that, when they fought against the Shredder, they barely escaped with their own lives. In hopes that the Turtles will be able to defend themselves against such adversaries, Splinter has the four turtles train non-stop for the weeks that follow with few breaks.

For the next couple weeks, he drills the boys constantly with hardly any sleep. Eventually, he agrees to give them a short rest when they are so tired out that they can't even duel with eachother and are constantly objecting to the exertion. The Turtles deal with all of the stress in their own ways. Leo watches episodes of Space Heroes, Raph lambastes the show as always, Mikey playfully throws a water balloon at Raph, and Donnie works on another invention of his; an all-terrain Patrol Buggy with four detachable side cars.  Mikey then  tosses a water balloon at Leo's face, though Leo ducks and Donnie's face is accidentally hit. Mikey is then chased out of the room, though he yells that Leo will be the next one to get "Dr. Prank-ensteined".

Meanwhile, April O' Neil tricks the Purple Dragons into taking a bugged Pizza from her, from which she can listen in on their plans with her phone. She comes into the Turtles' lair and they use April's phone to hear the Purple Dragons talking about one of their meetings with the Shredder; the latter has learned from his henchmen that the Turtles home is in the sewers and, apparently, that piece of information is all he needs to know to wipe them out. Splinter, realizing that their home is in jeopardy, reluctantly allows the Turtles to venture up to the surface to find out more about this plan. Outside of the Shredder's hideout, Mikey remarks that they may just be in over their heads because of Splinter's lectures, but Raph disagrees with this, commenting that Mikey is 'always' in over his head. Then, the mutated Chris Bradford rounds a corner and the Turtles suddenly feel the need to panic...just a little. They try to fight him, but their Ninjutsu skills aren't enough to combat his brute strength and the mutant defeats them. Leo is able to throw down a smoke bomb to make their escape and, after they solemnly report back to Splinter, where Mikey nicknames the new Bradford "Dogpound" and Donnie mentions that they might just have to look for another place to hide, but April doesn't want them to give up and volunteers to spy on the Shredder for them, much to Splinter and the Turtles' dismay.

Later, April heads to the Foot HQ (with the Turtles monitoring her) and tries the same pizza ploy on a Foot Ninja, but he does not fall for it and slams the door on her. She then discards the Pizza and disguises herself as a fireman, going next store and managing to gain entry into the building after purporting to the resident that the building has faulty wiring. After reaching the roof of the building, she scarcely manages to jump onto the roof of the Shredder's hideout, where she overhears him instructing Dogpound, three Foot ninjas, and a Purple Dragon member to hijack a tanker truck filled with a rare, dangerous, and acidic chemical. As the Foot leave the building to conduct their mission, April tries to monitor them at a closer proximity, but Dogpound hears her communicating with Leo via a T-Phone and captures her, gagging her and putting her in the follow van with the two ninjas and the Purple Dragon.

Leo has a brief panic/anxiety attack when he doesn't know what they should do, but Raph is able to get him out of it after reluctantly saying some qoutes from Space Heroes. Leo decides that they will have to chase the Foot down by using Donnie's new Patrol Buggy, though Donnie tells them that he hasn't finished it yet. Despite this, the Turtles are forced to deal with it. Meanwhile, the Foot Clan spots the tanker that they're after and they quickly and easily hijack it, with Dogpound coercing the driver into getting out. A Foot ninja then drives the tanker away, while Dogpound hangs onto the side of it. He tells the Foot Ninja to call the Shredder and tell him about their success. However, when Dogpound sees the Turtles approaching them, he tells the ninja to hold that call. Meanwhile, Donnie is able to read the name of the acid that the truck is filled with, which is Chlorosulfonic acid. Seeing this, Donnie figures out the Shredder's plan. When mixed with water, that acid reacts violently, so, if it is dumped in the sewers, the whole sewer system will be blown up in seconds, along with their lair and Splinter. Leo suddenly decides to detach Donnie's patrol buggy into four separate karts. Donnie and Raph go after the van to save April, while Mikey and Leo stay on the tanker's trail.

Donnie blinds the Purple Dragon leader with a smoke bomb, while Raph shreds the tires with a ton of Makibishi spikes. After the van has been disabled, two Foot ninjas leap out of the back of the vehicle and fight Raph and Don, but the two turtles defeat them. Fong then jumps out of the front seat with cleavers, but April clocks the gang member with the door of the van. Meanwhile, Leo and Mikey try to stop the tanker with grappling hooks, but, because nothing in the buggy is quite ready, the grappling hooks fall apart. Soon after, the tanker reaches a manhole and Dogpound rips off the cover, throwing it toward Leo and Mikey. Leo engages the beast in battle, while Mikey tries to stop the Foot Ninja that is unraveling the hose to flood the sewers with acid. Mikey is able to defeat the ninja, but Dogpound manages to hold Leo up against the tanker and one of Leo's Katana blades accidentally punctures the tank, which causes a torrent of acid to burst out. Leo, knowing that the chemical reacts violently with water, remembers that Mikey had a water balloon to hit Leo with and tells him to use it to throw at the chemical. Mikey does this, which causes an ignition that destroys the tanker truck. Mikey then strikes Leo with another water balloon, leaving Leo to wonder where his brother is able to keep all of his balloons.

Back at the Foot HQ, Dogpound cringes before the Shredder and explains to him how he failed, but the Shredder finds his explanation to be ridiculous. As always, the Shredder is not in any forgiving mood and severs one of Dogpound's shoulder spikes as a punishment, threatening the mutant with death if he fails his next mission. Back in the Lair, the Turtles all eat a Pizza, but Mikey reveals to his brothers that they're eating the one that April threw out, which disgusts them. Splinter then appears, thanking the boys for saving his life and apologizing for allowing himself to make them fearful of confronting their enemies. He decides to give them a day free from training....unless Mikey hits him with a water balloon, which the young turtle was actually thinking of doing. Leo, Raph, and Donnie all tackle Mikey to change his mindset, ending the episode in a comic style...

"You must not allow fear to cloud your mind."

You think you are ready to face me?

You look so MAD!

Spying on the Purple Dragons 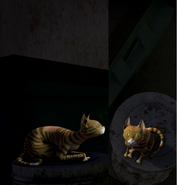 April is freighting when she hears Shredder's conversation.

Waiting for usssss
Add a photo to this gallery

Retrieved from "https://tmnt2012series.fandom.com/wiki/Panic_in_the_Sewers?oldid=74419"
Community content is available under CC-BY-SA unless otherwise noted.