Pizza is an Italian-American food made with dough, tomato sauce, cheese, and other things such as spices and toppings. Pepperoni is one of the most common toppings. Pizza is the turtle's favorite food and one of the first things they discovered above ground.This is one of the Turtles most desired foods.

How it was Discovered

The turtles first discovered pizza in this episode after Master Splinter allows them to go above ground. The turtles were wandering the street when a delivery boy for Antonio's Pizza drove up to them on a motorscooter. He is shocked to see them, and Raphael makes a scary face, causing the delivery boy to get scared and drive away. He accidentally dropped a pizza pie in the process of doing this. Leo then tells the turtles the have to go some where where they can't be seen. The turtles follow Leo, but Michelangelo stops and notices the Pizza box on the ground. The turtles then decide to bring the pizza up to the rooftop with them. They had no idea what it was, as it was something new to them. Mikey mispronounces it as Piz-ah. Leo warns the turtles that it could be dangerous but Raph rolls his eyes and opens the box. Donnie says it looks like food, though Raph says it doesn't look like any kind of food he's seen before. Mikey volunteers to try it. Mikey grabs a slice and starts to eat it. He instantly becomes hooked to pizza, and finishes the slice quickly. The turtles stare at him, and Mikey says "Yuck" and that they wouldn't like it, so he should have the rest. His brothers don't believe him and grab slices for themselves. They all become hooked, making Pizza their favorite food leading Mikey to shout "I love it up here!"

Mikey will eat or drink anything that has Pizza in the ingredients. Seriously! It is the only thing he thinks about.

The turtles are always ready for some pizza!!!

The Triceratons discovered that Mikey only thinks about pizza.

Mikey is the first to notice the dropped pizza box.

The Turtles discussing on if they should try the pizza or not.

Mikey will try it first

You can do it Mikey!

What does he think?

Raph enjoys it as well!

Pizza is mainly a teenagers most common food. Especially when it comes to these teenagers. 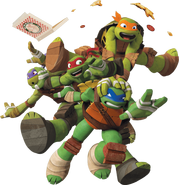 The Boys fighting over the last slice.

Mikeys first homemade "pizza"
Add a photo to this gallery
Retrieved from "https://tmnt2012series.fandom.com/wiki/Pizza?oldid=73681"
Community content is available under CC-BY-SA unless otherwise noted.