Were you looking for the character Pizza Face?

Mikey struggles to convince the others that a brand new mutant is capturing the minds of citizens using living Pizzas.

One night, April and Irma are walking out on a street in Manhattan and Irma asks April if she's in the mood for watching a movie called Dusk of the Zombies 4, which is playing in the cinemas. April is about to reply when she receives a call from the Turtles, upon which she starts making up lies about having a date with Casey. Then, a Pizza delivery guy drives by them and falls off of his bike. He screams about being assaulted and leaves in a hurry. He drops a free Pizza. April thinks about bringing it back to the guys, but Irma says that she would not eat it - no matter what. April receives another phone call and runs off. Irma sarcastically thanks April for spending some quality time with her. Elsewhere, April begins to trust the things that Irma had said and throws the Pizza into a dumpster. April is about to exit an alley when she suddenly hears a bizarre voice saying, "eat me." She then comes very close to the pizza box, and opens it, when something blurry emerges and latches onto her!!

In the Lair, Raph and Leo are sitting on the couch watching the Television, while Donnie is worried because April has not been answering her phone for quite a few hours. Mikey is worried as well because none of the pizza shops in town are answering, either. This makes the others groan in complete aggrevation...Leo convinces Mikey that he is actually a culinary expert and comments that he should cook a Pizza of his own. An enticed Mikey quickly runs into the kitchen. There, he prepares what he coins the 'ultimate Pizza', while making up rhymes and dancing with the Ice Cream Kitty. Raph complains about Mikey's singing, but a repulsive smell then reaches Leo and he and his brothers are disgusted. Mikey offers some of his home-made pizza to the others and they immediately spurn the offer when they see the mold and worms that are in it. Mikey then quickly and readily starts to devour it. The other Turtles then witness a commercial involving Antonio's Pizza-Rama, in which many citizens act as if they want to 'obey' the flavor. Leo is suspicious. Nevertheless, he then calls the shop with his T-Phone and orders a Pizza. Raph then sends Mikey out to wait for it, but he also gives the explicit instruction to NOT take a bite. The Pizza boy soon arrives and sets the Pizza down, causing Mikey to grab it. The oddly behaving Pizza guy then drives off on his motorbike, while Mikey returns to his lair. He is extremely tempted to eat the food that he just received, although he manages to keep his hunger at bey and calls for his brothers.

Something in the box then starts speaking like it did to April, but Mikey, at first, thinks that it is just his imagination going wild. With some hesitance, Mikey opens the Pizza box and a combative, TALKING pizza starts to attack Mikey in an attempt to force him to eat!!! After the short fight that follows, the guys show up and see that Mikey is rolling on the floor covered in tons of Pizza toppings. They all thank him sarcastically for ruining their dinner. Shortly after, Mikey stakes on the rooftops to Antonio's to see what's going on and he spots April alongside a bunch of humans that are roaming the streets and acting identically to zombies. He is then approached by three people that have mozzarella cheese covering every single part of their faces. Their brutish strength easily outmatches his ninja skills and Mikey nearly gets pounded, but narrowly saves himself thanks to one of his smoke bombs.

He rushes to the Lair to warn his brothers and Master Splinter, only to see them 'zombified' from eating some of the pizzas as well. Once again, Mikey is attacked by several Pizzas and his family members make an escape while Mikey is facing away from them. The young turtle takes one of the Pizzas as a hostage, interrogating him about the circumstances. The pizza finally reveals everything after Mikey threatens to roast it in the oven. The Pizza claims that, one day, the humble chef Antonio was tossing Pizzas around and he heard a strange noise. A Mutagen canister came falling out of the sky from the Kraang Scout Ship and landed near Antonio's feet. He wanted to know if this was a secret ingredient gifted to him from the heavens. He put some on the tips of his fingers, licked it, and mutated himself into a food somehow, which affected dozens of other Pizzas in the process. After the little Pizza finishes talking, Mikey asks what Antonio has in mind for his zombie customers. The Pizza says that he will wrap them in calzones and eat them whole....tonight! Sickened, Mikey leaves with determination to save his family, but, before doing so, he leaves the Pizza in the freezer, where it is helpless against the Ice Cream Kitty.

Mikey sneaks to Antonio's, desperately trying to blend in as a zombie. After he successfully gains entry, he goes into the kitchen where he sees that April is getting prepared by Pizza Face (Antonio). When a Pizza comes up and asks what to do with the Turtles and Splinter, Pizza Face says that they will need to become part of his Elite Mozzarella guard, since he realizes that they have tasted his 'secret ingredient' (Mutagen). He throws up dough on to their faces and makes them his zombified Pizza slaves. Mikey then tosses a box at Pizza Face, but Leo stops it by stabbing into it. Mikey declares "the jig is up, Pizza Face!!", and Pizza Face says that he likes the name, though he sends the other three Turtles and Splinter to attack. Mikey luckily knocks down all three of his brothers, while offering apologies to Leo and Donnie, but not to Raph. Nevertheless, Mikey is then knocked down by Splinter.

Mikey gets back up again and makes a resolution to destroy Pizza Face, but he then gets stuck to the wall by Pizza Face's sticky barf. Just when Pizza Face is about to consume April once and for all, Mikey's stomach starts to rumble and he realizes that he is also extremely hungry, so he begins to bite his way out, much to Pizza Face's terror. Pizza Face ends up swallowing Mikey whole when the young turtle tries to attack him, but Mikey then starts to eat him from the inside out, up until the point where the mutant is reduced to nothing but a single slice of pizza. Mikey tells what's left of Pizza Face to bring everyone back to normal - or else he will eat him. Pizza Face reluctantly agrees, mentally ordering the Pizza zombies to return to their homes where they won't remember a thing. Mikey begins to gloat out loud to his brothers about being correct and having an Iron-stomach, but Pizza Face then strikes him in the face and appears to render him unconscious.

Mikey suddenly wakes up in his bed, and his brothers & April walk in. Grateful that they are back to normal, Mikey starts babbling about how they were all pizza zombies and that Pizza Face was 'gonna eat April'. The others start telling him that it was just a deceptive dream, and they soon leave his room after telling him to get more rest. Mikey begins to believe that it was indeed all a dream and goes back to sleep. Pizza Face confirms that it wasn't, however, as he hiding in one of Mikey's empty Pizza boxes and laughs several times.

Splinter appeared in this episode, but never spoke. 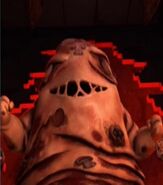 Retrieved from "https://tmnt2012series.fandom.com/wiki/Pizza_Face_(Episode)?oldid=73643"
Community content is available under CC-BY-SA unless otherwise noted.