TMNT Wiki
Register
Don't have an account?
Sign In
Advertisement
in: Season 3, Episodes that aired in 2014, Donnie Themed Episode,
and 3 more

Race with the Demon

When Casey and Donatello bond while building Casey's new hot rod, the bond is challenged by a hot-rodding mutant.

April, Casey, and Donnie are driving back to the farmhouse in the Party Wagon after grocery shopping. Donnie complains about the fact that he is always forced to sit in the back and can never drive. He suspects Casey (the current driver) of having ulterior motives and Casey only remarks that having a man-sized turtle driving a van might look suspicious. April shouts for enough and says she is tired of their complaints and wishes they would get along, at least enough for a quiet ride. They both comply, but the peace is short lived, as a purple muscle car pulls onto the road and begins to edge them off the road. Casey complains and says that it will take more than this to drive him off the road. The car pulls a maneuver that sends the car spinning out of control and finally slamming into a tree. After confirming that everyone is alright, Donnie makes a sarcastic remark about Casey's earlier boast, which causes Casey to slam repeatedly on the steering wheel in his anger.

Meanwhile, the others are at the farmhouse, watching another episode of Crognarrd the Barbarian|Crognarrd the Barbarian  when the local news interrupts the show. The reporter states that, due to the maniac driver, people are encouraged not to drive. Donnie, Casey, and April then return with the groceries and relay their encounter to the others. Casey wants to go after the driver, but April says to leave the matter alone and be grateful that everyone is safe and unharmed. Donnie complains about getting "shell lash" while holding onto the food, which Mikey claims to be a noble sacrifice and marvels at the food. April then begins to massage Donnie's neck, which Donnie immediately takes advantage of and shoots Casey an evil glare while Casey throws a subtle tantrum.

In the barn, Casey continues to work on the old rusty pick-up truck, with Donnie's assistance. After they are done, Donnie, Casey, Mikey, and Raph take it out for a test drive. The car behaves well, but Casey takes off on his own for a "real test": hunting down the maniac driver. At first, there is no sign of him and Casey feels disappointed, but the car does appear and Casey prepares for the next encounter. But it is revealed that the driver is a mutant and Casey is, once again, unprepared and loses control. The hot rod is totaled and Donnie, angry that Casey ditched him instead of letting him help, prepares to help tow the car back. Mikey notices a green ooze on the pavement and Donnie takes a sample back. It is some sort of mutagen gasoline. When they return to the farmhouse, Casey apologizes to Donnie for leaving him behind and asks for his help in fixing up the hot rod to track down the mutant driver. Donnie agrees, stating that he does have some crazy ideas. The two take parts from the Kraang ship underneath the house and outfit the car to use the Kraang tech. During their work, one of Mikey's chickens gets into the barn and drinks spilled mutagen gasoline. The result is the chicken grows a humongous brain and becomes super intelligent. Donnie, who had been trying to set up an AI for the car, decided on an alternative, after seeing the chicken is able to connect with the hot rod's computer. Leo, Raph, Mikey and April are given the big reveal shows the hot rod is outfitted with Kraang tech and the chicken's intelligence as a navigational system. The chicken also shows it can lay radioactive mutagen eggs. They decide then to hunt down the mutant driver with the newly outfitted hot rod. And Casey and Donnie have a plan.

Casey drives the hot rod out again and finds the mutant driver. After a few maneuvers, Donnie, in the party wagon, is able to pull the mutant driver out of the car. But the driver has returned to being a normal human and Donnie realizes that it was the car that was mutated. The mutant car, calling itself Speed Demon, pulls Donnie inside itself and possesses him, turning him into a frightening and crazy mutant driver. Casey sees the result and informs the others in the party wagon. Leo tells him they need a plan but Casey won't wait. He chases after the car and tries to fight it but it only results in both cars hitting the side rail. Speed Demon, speaking through Donnie, offers Casey a challenge: race him and if he wins, Donnie will be released. But if Casey loses, Casey will give up the hot rod with all the tech and become the new driver for the car. Casey agrees and the race is on.

The others watch and figure out what they can do while Casey and Speed Demon are fairly evenly matched, but Casey uses the tricks Donnie put on the hot rod to confuse the mutant car. Casey puts the car on auto pilot, leaving the chicken in charge and jumps out to fight the demonic looking Donnie. At last, Casey is able to pull Donnie free and he returns to normal. Speed Demon attempts to swallow Casey but Donnie takes him on and puts his bo staff in the car's mouth. This slows him up, but the staff breaks and the car attempts to swallow both until the party wagon appears and slams into the car, sending it flying off the cliff and exploding.

Casey and Donnie congratulate each other. April is thrilled that they are getting along, but her joy is short-lived as they obnoxiously praise each other. A new bromance has been born while April and Raph look on rather dejectedly.

"Donnie" — So why am I always stuck in the back with the groceries?

Are you talking with an over-sized brain Chicken?! 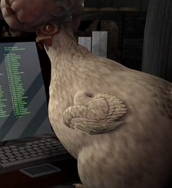 Time to swallow you!

AHAHAHAHAA! Guys! Do you see how much of crazy I am?! AHAHAHAA!

Donnie trying to hold on for his life.

The demise of Speed Demon and the birth of Chimera.