Raphael or Raph is one of the four main protagonists in Teenage Mutant Ninja Turtles and a member of the TMNT. He is the younger adoptive brother of Karai, younger brother of Leonardo, older brother of Donatello and Michelangelo, and the second son of Master Splinter. He is "The Muscle" of the team.

"Name's Raph. If there's a brawl, count me in. Leo loves to plan, but me? I'd rather fight first and ask questions later. If any shellbrains try to mess with me and my brothers, they won't know what hit 'em! Oh yeah, they will... ME! you bad guys heard me! If you guys ever mess with me and my brothers, you'll get it! I know that Leo and I have been fighting a lot but... we're brothers and brothers do fight. But we protect each other and that's what counts most in my life."

Raphael is the most violent of the four brothers. A straight-up brawler, he has very little patience for things like stealth, hiding in shadows, or keeping his voice down. While he's fiercely loyal to his brothers, he's also often the one giving them a hard time. Raphael is also the one most likely to strike out on his own when he feels slighted or underappreciated. His closest confidante was his pet turtle named Spike. Raphael's temper can get the better of him, causing him to get into situations over his head.

Raphael and his brothers were once ordinary turtles; when they were infants, they were adopted from a pet store by Hamoto Yoshi. When their soon to be father walked passed a strange man, a Kraangdroid, he felt something odd about him and followed. Unfortunately, Yoshi gave away his position when he accidentally stepped on a rat's tail. The Kraang found him and attempted to kill him, but Yoshi fought back hard. In the end, the Kraang dropped the canister of Mutagen they were holding, causing the turtles and Yoshi to mutate. Yoshi came in contact with a rat last, thus mutated into a humanoid brown rat by the name of "Splinter", while Raph and his brothers, after coming in contact with Splinter when he was human, mutated into humanoid turtles. Splinter knew they would never be accepted in society, so he took them to the sewers, made a home down there, and made the four turtles his children. Knowing the world would be dangerous and there would be a time where they want to explore the outside world, Splinter trained the boys in the art of Ninjitsu. Raph and his brothers were named after great Renaissance artists from a book Splinter fished out of the storm drain.

Raph is a kelly green mutant, ninja turtle, with goo green eye color and is the second-oldest. Like Leo, Raph doesn't have any changes to his physical appearance beyond the style of animation. He is much more like his other incarnations. There are several scratches and chips on his shell; a lightening bolt shaped crack/missing-chunk on the right corner of his plastron (He probably got it when he was a baby turtle as it was there during his mutation); and his red mask is very worn with long, tattered tails - all of which indicating his reckless side. He is "ruggedly handsome" as turtles go. Raph is the third tallest, and seems shorter than his siblings. His eyes are bright green, but like all of the turtles when they're fighting, the pupils and irises vanish, leaving his eyes white, similar to those in the majority of the 2003 incarnation.

The theme states that "Raphael has the most attitude on the team", like most incarnations of him. Raphael has an extremely short temper and is very hot-headed. He is brawny and aggressive, Raph loves fighting and does not care particularly if he is injured (thus his rather beat-up shell and mask) and does not like it when Donnie or Leo come up with very complicated, extravagant plans. If it were up to him, they would simply, in his own words, "bust some heads" and ask questions later. Raphael is extremely sarcastic and likes to make fun of his brothers, often coming up with very smart-mouthed remarks. Although Michelangelo is considered the funniest of the team, Raphael is the most sarcastic. He is also the most relentless of the turtles, his relentless ferocity makes him a deadly fighter.

Despite all this, Raph does have a soft side, (though it is rarely, if ever, displayed). Though he would never admit it, he is a very good person and loves his brothers and Sensei dearly. He would do anything to protect them, but he would never admit it in order to stay "hardcore" and to protect his pride. He tends to have a soft side for his pet turtle Spike, whom he adores. On rare occasions he even has a soft side towards Mikey, as seen in "New Friend, Old Enemy" and "New Girl in Town." And also in "The Wrath of Tiger Claw." he even hugs Mikey, considering he is the youngest, and therefore his baby brother.

Raph often lets his impulsiveness get in the way of rational thinking. In fact, Raphael thinks the least out of all his brothers (aside from Mikey). His temper, in a way, gives him a boost in his skills which helps him out in battle. The problem though, he often gets into situations without thinking. His temper and rash decisions often causes problems, not only for the team, but for himself. He was not able to cope as the leader as he cannot stand to risk his brothers, preferring to risk himself. He is fiercely loyal to those he cares about, and will not give up on them.

Tough, quick-to-act and hot-tempered, Raphael's a power keg ready to explode on unsuspecting enemies everywhere! The biggest of his mutant brothers, Raph has a "why sneak around when you can bash some heads instead?" attitude. Master of the twin sais, these three-pronged blades are the perfect reflection of their owner: sharp and to the point! 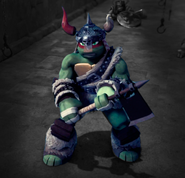 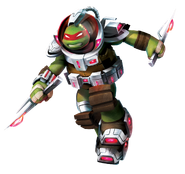 Raphael's Space Suit
Add a photo to this gallery

Ninjutsu: Like his brothers, he has a great sense of balance and agility. He can jump farther and higher than a human, as well as move quicker and more easily on narrow surfaces. He is the strongest fighter of the group (this is certainly true when training) Raphael has beaten his brothers including Donatello before in fights, both with and without weapons.

Enhanced Strength: He is the strongest turtle, lifting people over his head. He is also the most violent, and so he can deal harder blows - though this is not a question of strength, more of morals, his brothers would most likely not hit someone as hard as Raphael would. He was able to tackle Slash away from his brother Mikey. His greater strength may be do in part to his ferocious temper.

Enhanced Speed: He and his brothers are very fast. They can easily run faster than most humans, however, April seems to manage it somewhat (this may be due to the turtles running slower for her benefit). Raphael is the fastest of his brothers, and this is probably due to his temper.

Stealth: Like his brothers, he is stealthy, can hide in the shadows, sneak around without being detected, and use hand to hand combat like a real ninja.

Sai: He normally uses sai as sharpened fist-held stabbing knives ("sharpened" is specified because sai are usually used for defense rather than offense). However, he does have a large collection of other weapons.

Shell: He has the normal ability of a turtle to go into his shell.

Healing Factor: As shown that he took damage from his enemy's and plenty of wounds like his brothers could heal much faster than an average person.

Stamina and Endurance: He is able to take many attacks from his enemy's. Cause of his training and hard-earned blocking and fighting skills.

Interactions with other characters

Retrieved from "https://tmnt2012series.fandom.com/wiki/Raphael?oldid=70886"
Community content is available under CC-BY-SA unless otherwise noted.