The Sai are short, triple-pronged, blunt-pointed daggers that are used by the ninja. They were originally a farming trowel tool used for weeding and harvesting vegetables but were re-evaluated as a weapon by peasants and ninja to fight against Samurai. They were ideal to use against sword blades and were so successful that many Japanese citizens carried them up to the 19th century.

The side prongs are used to trap, control, or even break an opposing blade. Raphael uses them as his main weapon in TMNT. Their handles have the same dark red and gold colors that Leo's katana swords and Mikey's nun-chucks.

Whilst sai are ideal in terms of close-range combat, and very useful to ninjas, they are not actually Japanese in origin. Usually blunt daggers and primarily used for defence, they are an interesting choice of weapon for the hot-headed and impulsive Raphael. He most likely chose them as they were easy to carry, effective in close combat and somewhat multifunctional.

Raphael has demonstrated several times that they can be thrown like kunai (a type of Japanese throwing knife) as well as being used as daggers. Whilst in Raphael's possession, they have been used as lock-picks, pizza forks and tools (for example, Raphael uses one to open a Kraang blaster). Because they are quite short weapons, they are incredibly sturdy and very durable; staying whole even in situations which have broken Leonardo's katana.

Donnie had used the Sais before in both the episode "Pulverizer Returns", and the 2003 episode "What a Croc", and a TMNT Adventure comic. Donnie would often poke himself with them. Splinter made them use each other's weapons to teach the turtles to fight outside their element.

When these bad boys aren't forking Raph's pizza, they're shredding his enemies. 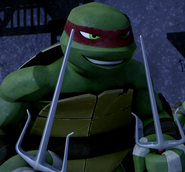 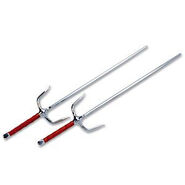