"Serpent Hunt" is the 10th episode of season 3 and 62nd overall.

As the Turtles search for Karai, they are confronted by Anton Zeck and Ivan Steranko, two thugs whom have had a previous encounter with the Turtles and are also looking for Karai to exchange to Shredder  for protection from the Kraang populace.

The episode starts with Kraang patrolling a street. Ivan Steranko watches from a corner before retreating to his secret headquarters, where Anton Zeck has taken up shelter with him. Zeck proclaims that they need to get out of the city, as their food supplies are running low and they have nothing to eat but dead cockroaches. Steranko agrees but acknowledges that escaping is nearly impossible due to the city being heavily patrolled and guarded by Kraang. Zeck fears that if they get captured, they may get mutated. However, Steranko refuses to get mutated and has a feasible plan to get out of New York. He reveals to Zeck his knowledge of the Shredder's mutated ''daughter'' and plans to make a deal with the Foot Clan leader over her: They will trade her to the Shredder (once they find her) in exchange for a safe passage out of the city provided by him.

At Antonio’s Pizza-Rama, Michelangelo, April, and Splinter clean and tidy up their new, temporary home. Mikey notices that Splinter's focus is not completely on the sweeping he's doing and asks him what's wrong, to which Splinter replies that it is dangerous in the city and that Raph, Leo, and Casey have been gone for a long time. Meanwhile, in the back of the building (where Donnie has set up a lab), Donnie is working on another retro-mutagen that he started making in the farmhouse to transform April’s dad, Karai, and other mutated people back into humans. However, it is not ready for use quite yet. Just then, Leo, Raph, and Casey return from a stealth mission of their's to the old lair, and April is surprised that they managed to sneak back in. Among the things they managed to retrieve are a box of Donnie's lab equipment for utilization in his ongoing experiments, a TV for Mikey, and Splinter's family portrait. As Mikey bakes a Pizza, April comments that this new home of their's is rather cramped for her liking. Splinter remarks that, for him, home will never be complete without his daughter alongside him. Everyone abruptly resolves to find her, and when Raph mentions that she could have been captured by the Foot or the Kraang by now, Splinter denies this and says that he saw her a few days ago roaming the streets at night, but he was not in his right mind at the time and could not help her. The Turtles are preparing to start the search for her now and so are April and Casey, but Leo orders them to stay back, leaving Casey displeased that he isn't able to fight alongside them and instead has to deal with his pent-up rage.

Meanwhile, in the Foot HQ, the Shredder is busy reproaching Rahzar and Fishface for their ongoing failure to locate Karai. The two hench-mutants resort to excuses, commenting that Karai is too stealthy for them and that they've looked everywhere for her, but the Shredder dismisses this and threatens to have the two tyrannized by Tiger Claw if they fail to bring Karai in soon.

Aided by a DNA tracker that Donnie has whipped up, the Turtles are able to locate and identify some serpent scales belonging to Karai where Splinter last saw her. Unfortunately for Mikey, he mistakes these scales for potato chips, guilelessly tasting them. While the Turtles swiftly follow Karai's mutagenized DNA trail, Zeck and Steranko have managed to locate recently shed skin of Karai's on a rooftop and, before long, Zeck notices Karai hiding behind a dumpster in an alley below. Brandishing a dart gun in her direction, Steranko prepares to tranquilize her when the Turtles, having followed the DNA trail to Karai, appear in the nick of time and distract him. A fight is quickly instigated and Steranko manages to fire the dart at Karai, but Raph gives him a shove as he does so, causing the dart to miss Karai by a matter of inches. The dart, however, spooks Karai enough to make her flee the alley and after escaping the fight with the cover of a smoke bomb, the Turtles have to sneak past a plethora of Kraang forces before trailing her into a nearby warehouse.

Kraang droids are already inside the warehouse, however, but Karai fortuitously takes them down, saving the Turtles some trouble. The boys immediately try to communicate with Karai sans Donnie, who asserts that Karai is losing her sentience by the hour. However, Leo persists in communicating with her, eventually causing Karai to utter his name from memory and effortlessly shapeshift into her human form (still remaining a mutant). Leo asks her to return to their home with them, but she utters that she's too dangerous. Just then, Fishface and Rahzar arrive, Rahzar having picked up a whiff of the Turtles, stunning Karai with a taser and keeping the Turtles at bay with a poisonous smoke bomb. The two mutants of the Shredder bring Karai to a motorcycle outside the warehouse, but while they quarrel over who should get to turn her over to the Shredder, Zeck sneaks up and steals the bike with Karai placed on it. As Zeck departs down the street, Leo and his brothers look on with disappointment. Soon, Zeck meets up with Steranko in an alley way, whereupon Steranko gives the Shredder a phone call and arranges with him a clandestine meeting at the docks to voice his proposed deal to him. What both Steranko and Zeck don't realize is that Donnie had planted some Spy-Roaches on Steranko during their fight with him.

Down at the docks, the meeting goes down as scheduled, Zeck and Steranko proposing that the Shredder provide them with a safe passage out of the city in exchange for Karai's well-being. The Shredder, after arriving with Fishface and Rahzar as backup, remarks that he doesn’t make deals, but will make an exception in this case. His proposal of allowing Zeck and Steranko to leave this encounter alive if they give him Karai is interrupted when Leo shouts out, making the predominant offer: If they free Karai, he'll let all of them walk away with their lives. Both Leo and his brothers leap down to battle the Shredder while Fishface and Zeck face off and Rahzar and Steranko face off, Karai caught in the middle of their confrontation. The Turtles manage to put up a good fight against the Shredder as they score some hits on him, Mikey, Raph, and Leo managing the majority of them. Leaving his fight with the Shredder, Leo manages to kick both Rahzar and Steranko away from Karai and manages to free her from her restraints with a Katana. He then encourages her to flee while she has the opportunity, whereupon Karai motions to the east toward the city and utters the word “comet” before heeding Leo and escaping into the ocean. Leo begins to puzzle over what she could've meant by that word, while the Shredder rants about the departure of his surrogate daughter. Leo quickly throws smoke bombs in his face, allowing himself and his brothers to escape, leaving the Shredder thoroughly upset. Turning to see that Fishface and Rahzar have captured Zeck and Steranko, the Shredder has his two lackeys take them to Stockman's laboratory, insisting that someone must pay for the events that have unfolded today.

Zeck and Steranko are brought to Stockman's lab, where it is revealed that Stockman has prepared warthog and rhinoceros DNA for use in mutating Zeck and Steranko. Rahzar and Fishface poke fun at the unfortunate duo over their "choices" of mutation, with Fishface sarcastically commenting on the "excellent" DNA that has been selected for them and Rahzar laughing hysterically that Zeck will be turned into a warthog. The two frantically beg the Shredder for mercy, Zeck yelling that he's too handsome to be a mutant and Steranko referencing their "friendship" and claiming he'd be more useful as a human than a mutant. Their pleas are not heeded, and the two are mutated shortly. The episode ends with Zeck and Steranko bellowing into the sky in pain, confusion, and anger at being turned into freaks.

"Home for me will never be complete without my daughter..."

Zeck scared of his fate as a mutant. 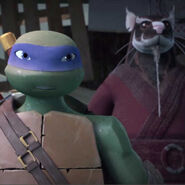 Zombies of The Kraang

Now... Ivan Steranko, my old friend... your animal is apropos

Wondering what is April is thinking now

I am Ivan Steranko!

She's not your DAUGHTER

Retrieved from "https://tmnt2012series.fandom.com/wiki/Serpent_Hunt?oldid=65621"
Community content is available under CC-BY-SA unless otherwise noted.