The Tanto is a short dagger used by the Turtles. It is the smallest of the three traditional blades carried by a Samurai. The ones used by the Turtles are light, straight, and perfect for throwing. It appeared in episodes, such as New Friend, Old Enemy, TCRI, Panic In The Sewers and Wormquake!. In "New Friend, Old Enemy", Leo used these to cut Mikey free from his bonds when he was kidnapped by Chris Bradford and Xever. Leo also used one to defend himself against Tiger Claw and Karai in "Wormquake!". In "TCRI", Donnie used Leo's tanto to make a cut in the glass cell he and his brothers were trapped in when they were captured by the Kraang.

In "Slash and Destroy", Raph takes one out to use against Slash after seeing him beat Leo up, since his Sai were knocked out of reach earlier in the fight.

Leo has one hidden in his Katana, as shown in "Wormquake!" and "The Invasion".

In "City at War," April becomes a kunoichi and Splinter gives her a tanto blade. But after, she encounters Shinigami who defeats her and steals her blade. When she shows up at Shredder's Hideout to steal it back, Karai says she must fight her to get it back. After being defeated for the second time, Karai instructs Shinigami to give her blade back. Later, Shinigami and Karai apologized.

This traditional samurai dagger is great for close range combat and surprise attacks! 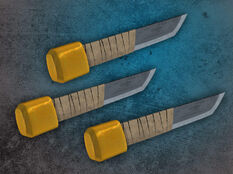 Leo's Tanto in Katana in "Wormquake!"
Add a photo to this gallery
Retrieved from "https://tmnt2012series.fandom.com/wiki/Tanto?oldid=70137"
Community content is available under CC-BY-SA unless otherwise noted.