"The Alien Agenda" is the 15th episode of the Season 1 of Teenage Mutant Ninja Turtles. It premiered on February 8th, 2013.

"Trust her if you dare."

The Turtles get their first taste of high school when April's school project draws Kraang attention.

Karai and a legion of Foot Soldiers leap from rooftop to rooftop in search of the Turtles. Karai tells the Foot that the Turtles have been spotted in the area that they're in. Just then, Karai hears the Turtles and peers over the edge of a rooftop into an alley below to find the Turtles immersed in battle against the Kraang. At first, Karai believes that these are only robots until she notices an actual Kraang emerge from its robot body. Leo then looks up, sees Karai staring down at him, and pretends to save his brothers' lives by defeating the remaining Kraang, thinking that he can impress her. Raph notices Leo's awkward behavior and manages to catch a brief glimpse of Karai as she departs. Raph insinuates his knowledge of the situation to Leo, causing the two to look each other in the eyes angrily; Mikey and Donnie are left in the dark about their brothers' issue.

At the Shredder's lair, Baxter Stockman lays the final touches on the apparatus for Xever that allows him to breathe, walk, and fight on land. However, when Xever gets the pleasure of standing up, the device that controls his robotic legs doesn't function properly, causing Dogpound to erupt with laughter. The Shredder then shows up, displeased with Stockman's failure. The villain threatens Stockman with the loss of his legs if he fails to upgrade the suit, offering him one last chance for redemption. Karai arrives and tells her father about what she just witnessed: the Turtles fighting aliens in robot bodies. The Shredder quickly tells his daughter that her one mission is to destroy the Turtles and Splinter; everything else is a distraction. Karai accuses her father of not investigating the mutation of Xever and Bradford, commenting that there is more to life than Shredder's vendetta. The Shredder disagrees, telling Karai that his vendetta is the only thing they should focus on and that every day Splinter lives is "a stain on their honor that they must wipe clean."

In the dojo, Raph accuses Leo of trying to impress Karai by defeating the Kraang. Leo remarks that he was trying to show her how formidable he is; Raph responds that Karai may have been studying his moves for use in future fights. The red-masked turtle tries to convince Leo that Karai should not be trusted, only making Leo determined to prove him wrong. The two then attack one another, and Splinter enters the dojo as Leo puts Raph in a headlock. Splinter asks what is going on, and Leo tells him that it's nothing important, to which Raph reluctantly agrees. In the living room, April tells Mikey and Donnie about a project that her class was assigned. It involves sending a sample of her saliva (DNA) to a place known as the World Wide Genome Project, which will send her back a report telling her about her ancestors.

Leo heads out into the city and waits for Karai on a rooftop, hoping to speak with her. As expected, she arrives and voices to Leo her interest in the Kraang, but Leo refuses to tell her anything about them, only advising her to steer clear of them. Karai then lunges at Leo, and the two proceed to fight, with Leo still trying to convince Karai that she is a good person and offering her a way out of the Foot Clan. However, she responds by mockingly calling him ''stupid but adorable''. Leonardo is distracted by this statement, stopping and going "Really?? You - You think I'm-" before defending himself as she attacks. Karai then jumps onto a different rooftop and Leo follows. Finally, fed up with her games, Leo tells Karai that if she comes after his brothers, he'll come after her and attack with no mercy. Karai acknowledges this and leaps out of sight.

At Roosevelt High School the following day, April enters to find a woman named Ms. Campbell standing at the top of a staircase. The woman says that she is from the Worldwide Genome Project and offers to give April her DNA test results. However, April senses something off about Ms. Campbell when the latter repeatedly says the words "Come with me'' in a robotic tone. As April turns around to leave, Ms. Campbell grabs her by the arm, swinging her back inside. April runs through the hallways in the school, trying to elude her assailant. Eventually, April does so by hiding in a locker, and she texts the Turtles about the situation.

Back at the lair, Raph asks Leo if he's told Mikey and Donnie about Karai yet. Leo responds that he hasn't but had a chat with Karai and convinced her to leave them alone. Raph sarcastically says that villains always back off when you ask them to. The Turtles then receive April's text and head off to the high school. Upon arriving, Mikey is immediately fascinated by everything in the school... The Turtles then face off with Ms. Campbell, who has the ability to fire missiles out of her ''elbows''. After Donnie and Leo cut off her robotic face and Mikey electrocutes her with water from a drinking fountain, April comes out of hiding. It is revealed that Ms. Campbell is a Kraang droid without a Kraang brain inside of it. April then heads back to the lair as the Turtles go to check out the Worldwide Genome Project, suspecting that the Kraang are behind it.

That night, they locate the building and break into it, unaware that Karai has chosen to follow them once again. While inside, they finally realize that the Kraang are the ones who have been running the Worldwide Genome Project and have been amassing DNA samples from all life-forms (plants and animals) on Earth for unknown purposes. Just then, Raph spots Karai, grabs her, and starts fighting her for the heck of it. Leo tries to break them up, but, in the process, he stumbles backward and accidentally presses a button that summons a gigantic squadron of Kraang. They fight them and, after Leo notices that Karai is destroying several of the robots, tries to convince Raph that Karai is working alongside them, but Raph bluntly ignores this. When the Turtles are eventually trapped in a corner, Karai selfishly decides to press down on a button that combines all of the DNA samples, despite Leo and one of the Kraang's warnings. This creates a hideous abberation octopus mutant that Mikey decides to dub "Justin". Leo is hurt to finally realize that Karai is more egocentric than he believed. Karai simply scolds Leo for his mistakes and picks up a dismantled android body near her feet. She then leaves the Turtles to deal with the mutant monster by themselves. Leonardo angrily battles the mutant after his brothers and the Kraang have been beaten. He uses his Katana blades to channel Justin's energy beams into nearby computer consoles, which sets the monster on fire and it explodes, causing the entire building to collapse in seconds. After the Turtles have left the building for the firemen to find/deal with, Donnie tells Leo that he will have alot of explaining to do...

At the Lair, Leo finally admits to his brothers, April, and Splinter that he had feelings for Karai and frankly apologizes for letting those feelings interfere. Splinter tells him that he is not the only one to let his feelings for a young woman get in the way, but advises him to sever his ties with her. Leo thanks him for his understanding and not being very mad, but Splinter strikes his son's foot with his staff, which indicates that he is pretty mad. Before Leo heads off to bed, Raph approaches him and Leo views this as an opportunity to tell him he's sorry for not trusting him, which Raph accepts. He tells him that he understands why he was attracted to her in an 'evil kind of a way', but he now thinks that Leo really has gotten past it. After Raph leaves, however, Leo looks down with a conflicted look on his face, wondering what Karai is doing right now.

Back at the Shredder's lair, things are getting out of hand, as Stockman still has trouble getting Montes' legs to respond. Karai walks in with the stolen Kraang exo-suit, delivering it to Stockman. The Shredder continues in his rant, exclaiming that he doesn't care about the 'robot fiction', but Karai then shows her master the Technology that the Kraang are using to manipulate their own bodies. Stockman takes an immediate interest in this, commenting that this is the the exact type of interface that he's been trying to develop for weeks, by himself. The Shredder realizes that Karai has done very well and asks her to go after the Kraang and find out everything she can about them, as this could help the Foot Clan end their war with the Turtles. The episode comes to an end when the Shredder puts his hands on Karai's shoulders and she smirks with malice.

"Deception is one of the ninja's most powerful weapons...and it seems as if Karai is a master." 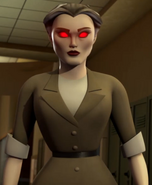 Shh!
Add a photo to this gallery

Retrieved from "https://tmnt2012series.fandom.com/wiki/The_Alien_Agenda?oldid=74022"
Community content is available under CC-BY-SA unless otherwise noted.