TMNT Wiki
Register
Don't have an account?
Sign In
Advertisement
in: The Show, Episodes that aired in 2015, Season 3, Episodes

The Turtles are baited by an unknown enemy into deadly traps!

Raphael is enclosed in a room with brick walls and has no idea how he got there. He looks around and pokes at the brick walls where suddenly some holes appear and emanate intense heat. Raph doesn't react well to the heat, quickly passing out.

Six hours earlier, in the sewer lair, Donnie continues to work on a formula to negate the effects of the Shredder's mind control concoction. Donnie adds a chemical to a mixture of others in a beaker to see if it creates the desired solution, but the chemical only causes the mixture to turn black and overflow from the beaker. Much to his own reluctance, Donnie reports to Master Splinter that there is nothing he can do to help Karai. Splinter, sparing Donnie more hard work by noting that he's tried his best, says that he is satisfied with four wonderful sons. Leo orders Donnie to try harder, but Donnie is tired of always having to find solutions and angrily tells Leo or Raph to find the answer. Raph says that Karai is a lost cause, garnering Mikey's ire. As all of the Turtles begin arguing, April calls Donnie on his T-Phone and he answers. April tells him that she has to speak with him about something urgent. Donnie goes out in the Stealth Bike to meet her to the dismay of Leo, who believes that Donnie is needed in the lair. Splinter reminds the Turtles that in times like these, they must not drive each other apart and that an effective team thinks as one.

In an alley, Donnie meets up with April, who tells him that the Kraang are back. Donnie is about to contact his brothers when April beckons him into a garage with her, and Donnie screams as he enters and the door is shut. Meanwhile, Leo tells Splinter that he will not give up on Karai, no matter what. Splinter is fond of this resolve, and Leo asks him if the Healing Hands could have a positive effect on her. Splinter responds that it is possible but is not certain that he has the ability to perform it effectively. In the kitchen of the lair, Mikey is playing a card game with Ice Cream Kitty when he receives a call from Donnie, who tells him to come to Murakami's restaurant because the latter has a sample of Pizza Gyoza set aside for him. Mikey agrees to come, even denying Leo's request for him to join a meeting in the dojo. At Murakami's restaurant, Mikey devours the Pizza Gyoza reserved for him but quickly starts to feel poisoned and falls to the ground. Standing above him, Murakami reassures him that it is not poison that he detects but chemicals to put him to sleep; Mikey quickly falls unconscious.

Back at the lair, April arrives and is greeted by Raph and Leo. They ask if she has recently spoken to Donnie, to which she responds that she hasn't spoken to him all day. Leo then gets a text message from Mikey, who says that he's trailed a Kraang to a local warehouse. April senses that something is off here and Splinter concurs, wondering who called Donnie if April didn't. Raph, Leo, and April then leave the lair to check out the warehouse but are warned by Splinter to be diligent given that he senses something dire. At the warehouse, the trio arrives and find Mikey and Donnie on their knees with their arms chained behind their backs. Leo and Raph approach the two to free them but find that they are only holograms. Karai then reveals herself on a balcony and speaks in Donnie's voice through a voice replicating microphone, commenting that she lured them in with a little clever staging. Explaining that Stockman hacked into their T-Phone signals and loaned her his Mousers to create holograms of April, Murakami, Donnie, and Mikey, Karai remarks that Splinter will have no choice but to fight her for the the Turtles' lives. Raph demands that Karai free his brothers, but Karai refuses and the other villains (Tiger Claw, Fishface, Rahzar, Bebop, and Rocksteady) appear, ready to fight.

As Leo and Raph face off with Shredder's henchmen, April runs toward the warehouse door to make an escape with prompting, dodging the attacks of Bebop and Rocksteady but getting kicked down by Karai. Leo and Raph are eventually kicked down as well and knocked out cold. Later, Mikey, Raph, Leo, and Donnie awaken in separate brick rooms underground, with Raph recalling how he got there. Karai speaks to them individually over an intercom, describing the unique obstacles in their rooms and how they are apt to each turtle. Raph is in a room dubbed the ''Hothead'', with holes in its walls that emanate intense heat. Leo is pitted up against a wheel of Katana blades called the ''Courage Slayer'' that spins rapidly and is set to descend slowly into his room. Donnie has been fitted with a wired helmet and tied to a chair, about to go on a mental roller coaster. He must play a game called the ''Brain Boggler'' in which he is challenged to connect cube pieces as they appear in a grid that the helmet creates. If he makes a mistake, he will get zapped via the helmet. Lastly, Mikey is in a trap called the ''Flush-o-matic''. He has been strapped to a table beneath a bunch of tanks that contain Mutagen, and these tanks are set to eventually empty onto him. Karai sarcastically wishes the Turtles good luck with their obstacles. April, chained with shackles around her wrists, tells Karai to let them go and that she is under the control of a Brain Worm. Karai quickly dismisses this as a lie, remarking that the only thing better than watching the Turtles' demise is seeing Splinter bear witness to it before she finishes him off.

In the dojo, Splinter's cheese phone rings, alerting him. He answers and is greeted by April, who tells him that both he and the Turtles are in a trap. Karai then addresses Splinter, telling him where she is located. She sends Bebop and Rocksteady into a sewer tunnel to face Splinter, but the two are easily defeated by him. As Splinter approaches the tunnel junction where Karai and the rest of Shredder's henchmen are stationed, he is nearly struck by Rahzar but sends the latter into a rivulet of sewer water. Karai motions Splinter to come face her, so Splinter leaps into the rivulet but is caught and dragged down by Fishface. Fishface soon surfaces, unconscious and without his breathing apparatus. Splinter appears behind Karai, triumphantly holding the apparatus. While Splinter does not want to fight his own daughter, he is forced to do so when he's told that it is the only way to free the Turtles.

As Splinter faces Karai to his reluctance after defeating Tiger Claw with assistance from a bound April, the Turtles realize that they are in rooms adjacent to one another and begin to form a plan of escape together. Donnie's obstacle is proving particularly difficult, as he is zapped over and over again upon making mistakes. Leo manages to jump beneath the "Courage Slayer'' just before it reaches the floor of his room, and both he and the machine fall into Raph's room where Raph is narrowly clinging onto life. Splinter manages to knock the sword out of Karai's hand and begs her to not make him fight. Karai then changes back into her serpent form, remarking that he has no choice, as April frees herself from her shackles. Meanwhile, Leo removes bricks from a wall in Raph's room with a Katana from the deactivated "Courage Slayer". He manages to slice an electrical cord outside, shutting off the heat in the room. Raph and Leo then break into Mikey's room, cutting him loose from his restraints just as he is about to get doused with Mutagen. Last but not least, Mikey, Raph, and Leo break into Donnie's room as he continues to get zapped. Leo prepares to slice off the helmet, but Donnie says that it's totally wired and that the action of slicing it off would fry him instead of free him. Mikey then bravely removes the helmet with his own hands, leaving Donnie awestruck.

Splinter sees that his sons are free on a nearby monitor and tells Karai to surrender, which she refuses to do. Karai leaps into the rivulet, allowing Splinter to prepare to apply the Healing Hands on her. When Karai returns, Splinter speaks the mantras and strikes her in multiple places before finishing with an application to her head. This causes Karai to lose control and fall over the edge of the base that Shredder's henchmen have set up (atop a Stockman Pod Suit). Splinter grabs onto her, but the base shakes and Karai slips from his grasp, falling into a vortex in the rivulet. An appalled Splinter is about to follow her when April holds him back. Tiger Claw then arrives, saying that Splinter's victory has come at a price. Tiger Claw prepares to fire at Splinter, but the Turtles arrive and drive him away. Splinter tells the Turtles about his fight with Karai and that his application of the Healing Hands to her was intended to help. Splinter believes that he will never see his daughter again. Leo consoles his sensei, telling him to never give up hope and that this was the greatest lesson he was taught as a kid. Splinter, the Turtles, and April return home while, unbeknownst to them, Karai ends up in a drain pipe and spits out the Brain Worm previously controlling her.

"Never give up hope." (from when the Turtles were kids as quoted by Leo)

"An effective team thinks as one."

"I'm about to double mutate! *breathes heavy* I'm scared what I'm about to turn into! *thinks of a female version of himself* AAAH! GET ME OUT OF HERE!" - Mikey 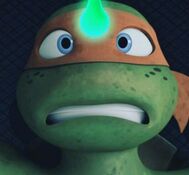