After Raph and Casey meet, they must put their dislike for each other aside to stop a common foe.

The episode begins in Casey Jones's house. In a voiceover, he courageously vows to protect his family and New York's populace by eliminating all of the mutants and criminals that are gradually taking over the city. In a time lapse, Casey vigorously prepares himself for the battles to come before donning his signature hockey mask...

Meanwhile, in the sewers, Master Splinter orders the Turtles to spar freely with one another, as they must know how to find weaknesses in their enemies. Donnie and Mikey are quickly outmatched by Raph and Leo and are eliminated from the free-for-all. Leo and Raph then come face to face with eachother. However, Leo wastes no time disarming his brother and he quickly leaves Raph in a defeated position on the floor. Raph is quite dissatisfied with this humiliation, however, and he pummels Leo quite hard in retaliation. Both his brothers and Splinter condemn this action of his, so Raphael chooses to leave the lair to think about what he's done and to get a breath of fresh air. Meanwhile, Casey is surveying "his" city from a rooftop, writing things down in a diary while doing so. He soon hears a nearby fracas, which turns out to be the Purple Dragons coercing a defenseless man into giving his wallet and watch to them. The muggers get their wish, but Casey then appears, announcing his presence with an ominous You guys picked the wrong night. The Purple Dragons start to snicker at the look of his outfit, but little do they know how prepared Casey is. Casey lunges at them and subdues all three of them with one of his hockey sticks. Unbeknownst to him, however, Raph is watching the whole scene from a nearby rooftop. Seeing how Casey is about to mercilessly take them out, Raph intevenes. Casey is somewhat surprised to see yet another mutant, but this does not intimidate him - Casey once again jumps into action.

Raph and Casey's brawl unfortunately allows the muggers to escape. Casey begins to blame Raph for letting them go, and ensuing is a protracted fight between the two. Neither seems to be able to mantain the upper hand for long, until Raph throws Casey onto the hood of a car and almost stabs into his face. After Raph restrains himself after realizing how he was so close to killing the boy, Casey manages to electrocute him with some type of tazer, and the vigilante escapes by jumping onto the rear end of a passing taxi cab. Raphael also retreats.

Back in the Lair, Raph mutters an apology to Leo for his behavior earlier that night. Leo convinces Raph to say it outloud, which Raph complies to and manages to lucidly summarize his anger issues to Leo, remarking that he now has them under control. Just then, Mikey begins to count down from ten in a deliberate attempt to irritate Raph, which succeeds and Raph indirectly retracts his previous remark as he leaves the lair once again!! The next day, at Roosevelt High School, April and her newly introduced friend, Irma, walk up to Casey, who is sifting through things in his locker. When he turns around to speak with them, they notice bruises on his face and a bandage covering his nose. They ask what happened, but to no avail. Casey lies that he received the injuries practicing hockey late at night, which both Irma and April have much trouble believing. Irma then proceeds to her next class, forcing April to come along with her. However, Casey whispers to April that he saw something 'Mutant crazy' the other night. The following night, Casey stations himself on the same rooftop that he was on before, musing that his body still feels battered because of his encounter with Raph. Coincidentally, Casey spots Raph not long after and heads off to follow him. Unbeknownst to Casey, however, a squad of Foot-Bots are following him, too!! Casey follows Raph into the sewers, and he ends up being led directly to the Turtles' home. Casey accidentially reveals his presence and the Turtles quickly surround him. April, after exiting the Dojo with Splinter, notices Casey and tells the Turtles not to hurt him, but also bluntly asks Casey what he's doing here. In turn, Casey asks her what she's doing with a bunch of mutants. She grudgingly explains that the Turtles were the 'friends' that she was telling him about, and Casey comes to the conclusion that they're not the bad guys. April then introduces the four of them by name. Hearing their names, Casey asks if they are all Italian and Splinter appears, saying that he named them after his favorite painters and sculptors of the Italian Renaissance. Casey passes out upon seeing this talking rat, but April wakes him up, whereby Splinter assures him that he doesn't bite...Then, April senses the Foot-Bots' nearby presence. The Foot-Bots show themselves and begin to invade the lair, much to the shock and dismay of those within it.

The team manages to hold their ground pretty well, and they begin to defeat the robots, one by one, although more keep entering. One robot stands alone from the fight, scanning the location of the lair. Fearing that he will inform Karai of their location, Raph and Casey decide to put their dislike for each other aside and go after the robot (who is running out of the lair) together. During this side-adventure, both Casey and Raph save each other (Casey saves Raph from getting run over by a train - and Raph saves Casey from getting thrown off the top of the train by the robot), which greatly strengthens their companionship. After numerous attempts to subdue the wild robot, Casey finally manages to electrocute it right before it reaches the streets. Raphael then throws a Sai directly into the robot's head, finishing it off. Raph comments that Casey is raw, unfocused, dangerous and crazy, but he isn't a bad fighter. Casey agrees and tells Raph that he isn't bad himself...for a reptile. The two then head back to The Sewer Lair and find that the remaining Foot-Bots there have already been reduced to scrap metal. Casey and Raph then engage in a miniature celebration due to their victory, which proves to Mikey and Splinter that they are now best buds. Donnie then exclaims that they now have two Raphaels and the new best buds head up to the streets to look for more skulls to bust.

"We have spoken about this time and again, Raphael. Anger is a dangerous ally; it clouds your judgement. You need to control it, lest it controls you."

"Always trust your instincts. A well-honed intuition, can be sharper than your eyes." 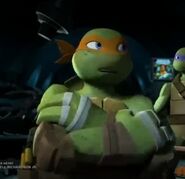 Is that a t-t-talking rat!?

Retrieved from "https://tmnt2012series.fandom.com/wiki/The_Good,_The_Bad_and_Casey_Jones?oldid=72533"
Community content is available under CC-BY-SA unless otherwise noted.