The Kraang Conspiracy is the 35th episode of TMNT and the 9th episode of the second season that aired on February 9th 2014.

"They are the creators of the Mutagen. They operated in the shadows. Many of their secrets were hidden from the world...until now!"

April feels left out and insists on joining the Turtles on a mission to TCRI; Some secrets about April's past are revealed...

The episode opens up with the Turtles on one of their training exercises, jumping from rooftop to rooftop - However, this time they have decided to let April tag along, though she finds quite difficult to keep up with them. Unbeknownst to them all, however, somebody is taking pictures of them from afar. After a little while, April senses the photographer's presence behind a water tower and all of the Turtles exclaim 'Get him!' in unison.

The man escapes into his very own apartment, but the Turtles manage to spot him doing so and they are forced to follow him into his home to see what he is up to. After entering, tons of pictures (most of which are the Kraang and Mutants, including the Turtles themselves!) catch the group's attention. They begin to wonder how the man might know of their existence. Then, Raph hears the man from behind a wall, and grabs him, holding his Sai at his neck. The man informs him that he is not an enemy, which prompts Raph to let him go. The man reveals that his name is Jack Kurtzman, a journalist who was investigating a missing scientist last year, until he recently discovered the Kraang. He informs them that the Kraang have been been plotting to terraform the earth for millenium upon millenium. However, their wicked plan couldn't be put into motion if they didn't have a 'specific chain of Human DNA'. He then shows April a photo of her as a baby, which catches her off gaurd. Kurtzman comments that her mother was one of the people that contained a unique genetic code and was also a person of interest to the Kraang that could perfect the Mutagen. When she was pregnant with April, she was experimented on. April is appalled by this but, before she can display her emotions, a squad of Kraang Droids coincidentally show up, intending to capture her.

The Kraang begin firing their weapons at the Turtles, April, and Kurtzman. April is nearly abducted twice in a row, but both Donnie and Leo are able to save her, miraculously. In a short period of time, most of the robots are obliterated. Kurtzman nearly falls to his death due to one of the Kraang's laser blasts, but Mikey saves him with his Nun-chuks. Outside, a Kraang's van is parked - and a Kraang steps out of it and opens fire on them once again. They all quickly jump into the Shell-Raiser, however, and escape. Inside, Kurtzman tells the Turtles that they will have to infiltrate the T.C.R.I. Building to erase everything on the Kraang's computers pertaining to April's DNA.

April believes that the TCRI building was destroyed when the Turtles had their huge encounter with the Kraang, but both she and the turtles find out that the building is now fully repaired. Kurtzman then tells the Turtles that they must find the code for April’s DNA, and erase it. He then hands them a TCRI key card, which he managed to swipe from one of their vans earlier. Leo tells April to stay with Kurtzman and mantain radio communication, but April insists on going into TCRI with them.

When they all enter the building, they come face to face with an android staring directly at them, along with many more, but Donnie soon concludes that these androids are just charging up. The five begin making their way through the office full of inactive robots, when, suddenly, they finish charging and stand up. The Turtles and April narrowly avoid being seen as they silently make their way to the nearest elevator. The elevator opens at the last possible second, and every one enters. After the elevator reaches the highest floor and after they all exit, it is revealed that Kraang Prime and a ton of other Kraang are mentally exchanghing thoughts through a gigantic projection screen. April is able to telepathically read their thoughts, but The Kraang hear both her and the Turtles moving. They all begin fighting, and The Kraang get a run for their money. Unfortunately, April tries to fight off Kraang droids by herself, which gets her captured amidst the ruckus and dragged out of a nearby doorway.

The Turtles give chase to rescue April, and run through the door that The Kraang dragged her through. They then find themselves in a hallway, but, to their surprise, April pops out of nowhere and runs towards them after seemingly escaping from the Kraang's grasp. She leads the four into a detention cell to escape a Kraang horde running at them; However, the cell doors close and poison gas starts to fill the room, with April laughing maniacally. The Turtles quickly realize that the "April" with them is some kind of duplicate. It is able to put up a good fight, although the Turtles are eventually able to defeat the clone by slamming it's face into a nearby control panel. The fake April explodes into black slime, and the elevator doors open.

The Turtles soon enter a large room, full of many April clones in stasis tubes. In another room, the Kraang are preparing to extract the real April's DNA to perfect their clones. To deal with the Turtles, a Kraang presses a button to open the "reject bin" and a malformed April clone emerges. While Mikey and Leo start fighting the inane April clone (which Mikey nicknames "April-Derp' because of it's limited vocabulary, which is comprised of the sole word "Derp"), Raph goes off to rescue the real April, and Donnie busies himself with hacking into the computers to erase April's data.

The struggle becomes more and more desperate, as Leo and Mikey start to have trouble in their battle with April-Derp and Raph is seized by some Kraang droids before he can rescue the real April. Under the pressure, April yells out really loudly and emits a telepathic signal, incapacitating the nearby Kraang and "April-Derp". With their enemies severely weakened, Raph is able to rescue April, "April-Derp" is destroyed, and Donnie successfully ersases the data. However, right when they are about to escape, the other April clones are released and confront the Turtles, with the real April slipping into the crowd amongst the confusion. As the Turtles wonder which clone is the real April, the truth is suddenly revealed when April pulls out her Tessen fan and starts destroying a couple clones with it. The Turtles and the real April obliterate the army of clones together and Kurtzman helps them escape in one of the Kraang's vans. After dropping them off, he gives the Turtles his card in case they ever need his expertise again.

In The Sewer lair, Donnie inspects April's DNA under a microscope and makes a shocking discovery: There are traces of Kraang alien DNA inside of April's DNA, and he jumps to the conclusion that, because April has some psychic powers, she is a half-human, half-alien mutant, which appalls both the Turtles and April herself. Mikey then casually 'welcomes her to the family', ending the episode in a comic style...

Splinter is mentioned but not seen.

The Kraang disguise as a Knight is mutating a Goat

The Kraang as one of the Gods of Ancient Egypt

Wyvern-like Creature mutated by the Kraang

The Kraang during the Medieval Age 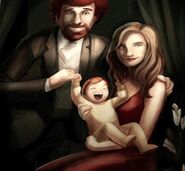 Retrieved from "https://tmnt2012series.fandom.com/wiki/The_Kraang_Conspiracy?oldid=71174"
Community content is available under CC-BY-SA unless otherwise noted.