"The boys are back in town!"

When Shredder teams with the Kraang to receive a batch of mutagen, the Turtles' problems only get worse--even putting their friendship with April at stake.

The episode starts off with Mikey and the Turtles running around the city, still celebrating their victory after defeating the Kraang once and for all. The turtles continue celebrating, until Donnie realizes that they had to go to April's apartment. He taps on her window, and she greets them with a suspicious "Hey, guys!" Leo asks why she had been avoiding them for a long time, and she responds, explaining that her father is having Kraang nightmares. Kirby enters the room, claiming that the Kraang may still be lurking alive, and that he'd do anything to protect April from them. Of course, along with the Turtles' help, April tells her dad that she can handle herself; especially with her ninja friends. Mikey encounters her argument, saying that there was nothing to fear, and the Kraang are gone forever. Meanwhile, at Shredder's lair, Shredder is seen putting his helmet on, while Karai walks near his throne, setting up a projected screen provided to them by the Kraang. As planned, a Kraang appears and tells Shredder that the shipment he asked for is ready and that they have a special weapon prepared to complicate any interferences. This is proven when the screen shows a foot of some sort of ape.

Mikey, Raph, and Leo are playing with the communication orb, using it as a dodgeball. Donnie is shown tesing out mutated Timothy's organs, until the orb is thrown on Metalhead's head, having Donnie leave his lab, telling his brothers to not throw the orb. Raph tells him to calm down, as well as Mikey. After that happens, Splinter enters and tells his sons, that maybe their enemy isn't truly defeated. Leo declines and tells him that there's nothing to worry about. The Turtles head out to leave the lair, until Splinter snaps and tells them that the party is over and to keep training. They obey his orders as soon as he leaves. Leo suggests that they were being a little cocky, but Raph refuses. He begins to protest, but after a while, the communication orb begins to become alert. Donnie says that it can mean one thing; the Kraang are back. At Donnie's lab, he researches what exactly the orb is alerting about, and it was actually another Kraang ship flying across the city, leading their plan to no good. Donnie asks April to help her father indicate high radiations, in case the Kraang are nearby. She tries her best to tell her father, since he worries about the Kraang and April. After she leaves, Donnie introduces the T-Rocket to his brothers. Leo asks April through their T-Phones if she was in position, and she agrees. Her father questions why it was late for a class project, but April makes up that it's extra credit for pigeon migration. The lie doesn't last forever, when Mr. O'Neil tracks a high radiation and spots the Kraang ship. He freezes in shock after a while. Meanwhile, the Turtles are getting ready to launch the T-Rocket and blasts off outside the sewer through the subway. They fly up high in high speed, in the night sky, all four turtles falling from the rocket, using their Turtle Flyers to soar to find the ship; not long before they can start, they seem to found it already (by crashing into it), since it's been invisible. They enter the ship, facing the Kraang once again. The Turtles begin to sound cocky again about their first victory, until one of the Kraang's newest creations start to enter and fight the turtles. This ape-robot is controlled by a Kraang brain itself. The Turtles fight the robot, but when its weapons almost struck Mikey, it strucked a button to open a shipment of mutagen! Outside the combat, April is hoping her friends can make it out and take the ship down. While everything seems to go alright during the big fight, Mikey accidentally presses a button that opens the ship, having the ship going side-by-side. Donnie realizes that the mutagen containers got out of the shipment, and tries to catch one. But it was too late. All of the mutagen containers fall out from the Kraang ship, in the sky, April staring in terror. The containers land, many not breaking, and falls hidden throughout New York City. One container with mutagen then falls toward April, leaving her not knowing what to do.

But, instead of falling on April, the mutagen effects Kirby, who blocks her away from it. He begins to mutate and falls out of the building, with many bats (that was under them the whole time) and flies after mutating. April falls in horror, staring at her mutated father leaping on top of the other rooftop. She yells in panic, very frightened of what he has become. Kirby, who is now a ugly mutated bat, flies toward April to attack her. Meanwhile, in the ship, Raph blames this on Donnie and Mikey, and continue to keep fighting. The Turtles stick to the plan and tries to keep fighting the robot. Now, it shows April running away from her father. She uses her tessen to attack him with one shot, him showing a scared and hurt expression, having her apologize to him. After controlling the Kraang ship with Donnie's naginata, they are complete defeating the ape-robot and escape the ship. They fly with their gliders and head off to find April. They find April with a mutated bat, and run to attack it. April exlaims to not hurt him, stopping them with confusion. Kirby pushes the Turtles away and flies away with April. Leo suggests that the mutant might be April's father, and Donnie wants to help get April back. Raph tells him that they have to find the mutagen containers around the city, but Leo agrees with Donnie that April's dad comes back. In the lair, Donnie can't think straight and is becoming more worried. Leo asks Master Splinter for advice on trying to get a stray pet, and he responds by saying to get food, since it usually works for animals. He asks why he wants to know, but Raph lies saying that they wanted to catch a parrot. Splinter leaves without another word and the Turtles figures that bats eats rodents and bugs. They come up with a better bait, using Mikey as a bug. That makes him name himself, "Turflytle" as his superhero name.

April wakes up on a high ledge from a high building, wondering how she got up there. As mutant Kirby flies towards his daughter, he vomits a dead rodent and a few garbage items as food. April refuses to eat it and commands her father to get real food. He leaves to find more food and April buys herself time to try and escape the roof. The Turtles fly and searches for Kirby. Donnie tells Raph to move Mikey around to mimic the way bugs fly around to lead enemies. Kirby flies toward Mikey and almost eats him, but is safely lifted by Raph with the rope. They try to lead Kirby toward the warehouse as planned, and Leo freefalls on him to hold him steady. The bat pushes Donnie, and he falls from his glider, landing badly on a rooftop. April calls out to Donnie and he rushes to rescue her from the ledge. The Turtles lead WingNut (Mikey's name for him)  into the warehouse as planned, and traps him in a huge cage. Donnie and April run inside the warehouse and sees that her father is trapped. She worries for him and blames it on herself for not listening to her dad. Mikey calms her down, saying that it wasn't her fault, and that it was their's. The Turtles quietly tell Mikey to shut up, but April keeps listening. Mikey doesn't keep his mouth quiet and keeps explaining, saying that they'll get the containers back as soon as possible. April becomes upset and mad for what they did and Donnie says that he swears by Darwin's beard that he will cure WingNut, but the bat unfortunately flies off and escapes. April turns to the Turtles, very upset now. Donnie reaches his hand out, but April commands him to not touch her. She yells at Donnie very furiously that she doesn't want to see him or his brothers ever again. Donnie weakily tries to run after her, but Raph stops him, and tells him to let her go and that she needs some space. This leaves Donnie very upset as well and hurt.

Meanwhile, Shredder asks Kraang where his shipment of mutagen was, and the Kraang says that the turtles destroyed their ship and that they will find more mutagen around the city. Shredder tells Karai that The Kraang are useless and that he shall create an army of his own. Back at the lair, Splinter finds out about the problem and Donnie is still sad about April. Master Splinter tells them to forget the past and to begin searching for the mutagen before anyone else gets effected with it. A squirrel runs towards a broken mutagen canister, with mutagen splurred out of it. The squirrel curiously takes a sip of the mutagen, ending with dramatic music and the animal turning its head. 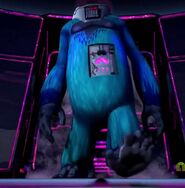