"This cat has nine lives!"

When Tiger Claw returns, he vows to hunt down and destroy the Turtles, Casey, and April. Meanwhile, Karai discovers the truth involving her real father, which forces her to make a life-changing decision.

At the Foot HQ, Karai contemplates what Leo told her about Splinter. The Shredder approaches her, asking her why she is troubled. Karai demands to know the truth regarding the death of her mother... and Splinter. The Shredder replies that she has always known what is true, once again lying that Splinter took the life of her mother. Suddenly, Tiger Claw opens the doors to the throne room, with an eyepatch covering his right eye and a torn left ear. Shocked by his return, Karai acknowledges that he was swallowed by a giant alien worm. Tiger Claw explains that, with bravery and might, he tore his way out of the Kraathatragon before battling the armies of the Kraang, as well as traveling across multiple galaxies in the name of finding a way back. With Tiger Claw striving to destroy those who put him through so much suffering (Splinter, the Turtles, April, and Casey), the Shredder tells him that his wish will be granted and orders Karai to join him on another bounty hunt, to which she reluctantly agrees.

At Murakami's restaurant, Mikey, Raph, and Donnie fight to obtain a small piece of Pizza Gyoza. The dumpling is about to fall into Mikey's mouth when Leo, who claimed he wouldn't try to get it, is able to catch it on the edge of his Katana blade and have himself a snack. Raph recalls that Leo seemed to be too busy brooding to even think about joining in on the fray, but Leo says that he could never pass up the chance to eat one of the dumplings. Murakami remarks that his restaurant was never that popular until he added the gyoza to his menu. He then offers Raph, Mikey, and Donnie even more. Near a window, Leo groans about Karai's continued willingness to stay with the Shredder, which Raph realizes and points out to Donnie. While chewing on food, Mikey tells Leo that he must have a little faith in Karai and give her time to see the error of her ways and that the Shredder is up to no good. Donnie then assures Leo that she'll come around eventually, but Raph doesn't want her to and says to his brothers that no one should trust her for a second. With Raph distracted, Mikey steals a Pizza Gyoza right from his fingers, and Raph obliviously bites his hand before attacking Mikey to reclaim his food.

Meanwhile, Tiger Claw and Karai banter as they run across the rooftops. Karai asks Tiger Claw what his plan for revenge is, to which he responds that he intends to strike at the hearts of the Turtles before their limbs. Tiger Claw then asks Karai a question of his own - Why did the Shredder send her out with him on this mission? Karai responds that she knows the Turtles and that the demise of their friends is their weakness, which makes her realize what Tiger Claw was getting at - going after April O'Neil and Casey Jones. The scene then cuts to Murakami's resturant, where Karai and Tiger Claw arrive. Karai tackles Murakami, positioning her Shikomizue near his throat and asking him where the Turtles' lair is located. Murakami repeatedly says that he doesn't know and pleads with Karai to spare his life, which she quickly does and claims that there's no honor in such interrogation. This does nothing to prevent Tiger Claw from stepping in to take his turn at interrogating the blind chef, however.

Just as the Turtles are about to enter the sewers via a manhole, Mikey remembers that he left his Pizza Gyoza in a doggy bag back at the restaurant and instructs the others to return with him, only to find that the walls in the restaurant have been torn apart and that Murakami is cowering in fear underneath the main counter. Murakami tells them that ''a growling man'' and a girl were both in search of their lair, though he couldn't tell them where it is located, as he does not know. To his utter shame, however, he told them where they could find April and Casey. After concluding that the intruders must have been Tiger Claw and Karai, the Turtles call April and Casey, but neither answer their phones. Leo tells Mikey and Raph to go to the ice rink where Casey hangs out to see if he's there while he and Donnie look for April.

We then cut to a scene of April, Casey, and Irma exiting a movie theater. April goes on and on about how brilliant the Sci-Fi movie is that they just watched while Casey complains that their ''date'' unfortunately had a "third-wheel" attached to it, implying Irma. April then senses someone following them and in anticipation of a fight, April and Casey make the decision to split up and lead whoever it is away from Irma. Tiger Claw goes after Casey while Karai silently pursues April. Casey runs to retrieve his duffle bag of hockey gear from a nearby fire escape and after grabbing it and hiding behind an alley dumpster, he starts thinking that he has successfully evaded his opponent. Just then, however, he is ambushed from above by Tiger Claw. Karai finally catches up to April, and the latter tells Karai that she's been training with Master Splinter and can beat her in a fight. Unexpectedly, Karai tells her that she didn't come to fight but to talk. April proclaims that she's been trained in talking as well.

While Karai voices to April the revelation of Splinter being her father and the discomforting impact its had on her, Leo and Donnie arrive at April's apartment and have Kirby call her, but he does not receive a response, making Leo and Donnie head to the movie theater that she went to to start their search. Meanwhile, Casey is able to electrocute Tiger Claw with his stunner, but Tiger Claw doesn't take kindly to this. Casey, startled, begins to run away with Tiger Claw in pursuit. Eventually, Tiger Claw corners him in a rooftop greenhouse, picks him up, and throws him over the side of a building into an alley. Before passing out, Casey manages to press a red button on his phone that automatically calls Raphael. At the ice rink, Raph answers Casey's call, but Casey doesn't respond because he is unconscious. Out of desperation, Raph turns to Mikey for help. The young turtle suggests triangulating the position of Casey's T-Phone by bouncing a locator signal off of a satellite. Raph is shocked by this intelligent idea and jokingly remarks that it feels like they're in an alternate universe. Mikey then says that his method can also be used to track Pizza delivery guys.

Donnie and Leo soon spot April alongside Karai on a rooftop, and when Donnie is about to take action against Karai, April stops him in his tracks and tells him to listen to what she has to say. Karai tells Leo that she believes him about Splinter being her true father, so Leo quickly and happily decides to bring her back to the lair with them. Donnie acknowledges that Raph will not like this at all. Back at the Lair, Raph harshly criticizes his brothers for allowing Karai to step into their secret lair and while all three of Raph's brothers unsuccessfully try to calm him down, Karai secretly taps a button on a device that Tiger Claw can home in on with a tracking beacon in his possession (this was likely a part of the two's original plan). The minor argument between the Turtles is halted when Master Splinter comes into the living room. He notices that Karai is present and tells his daughter to come with him.

In the Dojo, Splinter explains to her that he retains very little from his human life but shows her the little that he does retain in the form of photographs, one of which is him with his hand on Tang Shen's shoulder (that Karai has a piece of). Catching a glimpse of the family portrait on the shelf, Karai makes an admission that she can't believe what she's seeing. Leo mentions that Karai said she did believe that Splinter is her father so wonders why she came down here if she didn't all along. Karai then questions what she did just a minute before, which Splinter had realized (but the turtles hadn't). Now that she has proof that what Leo told her is true, Karai deeply apologizes to her real father for her rash course of action. She then reveals what her plan was to the Turtles and volunteers to solve the problem by leading Tiger Claw away. Splinter orders the Turtles to go with her while he stays with April and attends to a badly wounded Casey. Before this, however, he briefly holds Karai back and tells her that she is who she chooses to be; not who others tell her to be.

The Turtles and Karai all run through the sewers while Tiger Claw is on the surface pursuing them via the tracking beacon. Mikey leads his brothers and Karai to an abandoned butcher shop where they can stage an ambush for their opponent. In the shop, Tiger Claw cannot smell the Turtles, but he can still hear them well. Raph attempts to attack Tiger Claw from behind, but the mutant tosses him aside and takes possession of one of his Sais. He then backs up into a different room and the Turtles follow, battling him. Despite their best efforts, they simply cannot defeat the brute, who badly injures Mikey and pins Leo. Karai jumps into the equation and Tiger Claw asks her if she would like to have the honor of finishing off Leo. Karai valiantly turns on Tiger Claw but doesn't last long against him, as she is struck, knocked out cold, and taken as a hostage. Tiger Claw activates a saw machine and threatens to drop Karai onto it if the Turtles make another move. Taking advantage of the Turtles, Tiger Claw escapes the building with Karai over his shoulder. Leo suggests that they all chase after him, but they are unable to, as Mikey is in pain and needs to be taken back to the lair. Because the Shredder raised Karai, Raph is still hesitant to trust her and believes that the Shredder is undoubtedly welcoming her home right now.

Tiger Claw sets Karai down before the Shredder, informing him that she fought alongside the Turtles. Karai demands the Shredder to tell her the truth about Splinter and after a brief silence, the Shredder steps down from his throne to reluctantly confirm to her that she is the daughter of Hamato Yoshi. Seeing that Karai may now be problematic with her newly gained knowledge, the Shredder tells Tiger Claw to take her away. Tiger Claw grabs her by the shoulders, takes her into a Dungeon, and locks her up in an isolated cell.

"You are who you choose to be, not what others make you."

Drooling over a Pizza Gyoza

Karai with her true family 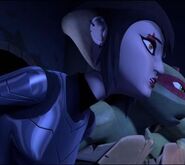 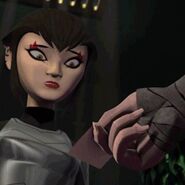 Retrieved from "https://tmnt2012series.fandom.com/wiki/The_Wrath_of_Tiger_Claw?oldid=73734"
Community content is available under CC-BY-SA unless otherwise noted.